Boko Haram, "Bring back our girls," and Retaliation as a War Strategy

In 1942, Polish Home Army soldier Jan Karski, one of history's most extraordinary heroes, brought eyewitness accounts of the ongoing Holocaust to British Prime Minister Winston Churchill and US President Roosevelt.

Before meeting with Churchill and Roosevelt, Karski had met with two Polish-Jewish leaders, Menachem Kirschenbaum and Leon Feiner. Karski asked them how the West could and should respond to the Holocaust. Kirschenbaum and Feiner made various requests. One of those requests was for retaliatory killings of Germans. Germans who had been captured should be killed and German cities, including civilian populations, should be bombed.

I think I understand Kirschenbaum and Feiner's logic. Hitler was a monster. He was destroying all Jews just because they were Jews. The only value he proclaimed was German identity. To stop the Holocaust, the Allies had to hit something he cared about – persons of German identity.

I have mentioned that I see Kirschenbaum and Feiner's logic to friends. When I do, they look at me as if I have lost my mind. I mentioned it to Jewish historian Antony Polonsky, and from what he said I gather that he found the idea abhorrent. I mentioned it to Otto Gross, whose father was a Nazi soldier. (You can read Otto's essay, "Ripples of Sin" here.) Otto told me that I was thinking like a Nazi.

Feiner and Kirschenbaum were certainly correct about one hideous fact, though. Hitler did come very close to murdering every last Jew in Europe. He did destroy living Jewish culture in Poland. Hitler was able to do that because sometimes the bad guys win. Sometimes the bad guys win because the good guys were not able to be bad enough to defeat them.

Would the approach they recommended have made any difference? I don't know.

Would it have been, as my friends suggest to me, morally abhorrent?

The Allies ended up murdering German civilians, anyway. We firebombed Dresden. According to historian Antony Beevor, virtually every female in Russian-occupied Germany was raped by Red Army soldiers. If that is moral, why would retaliatory killings have been immoral?

The best war is one we never fight. The best antidote to war is intelligence and ethics. But humans are notoriously stupid and immoral, and we ignore what we should attend to and wars happen. And when they happen, good people have to fight, and they must fight to win. Otherwise, the bad people win, and that just extends the misery.

Tactics that shorten wars and lead to the good guys winning are moral tactics.

Recently Boko Haram, a jihadist group, kidnapped over 200 girls in Nigeria. The world watches, transfixed, and impotent. Reports indicate that the girls are being raped multiple times daily and forced to convert to Islam. Commentators predict that the girls will never be rescued, and that they will be sold into sex slavery. They say that the girls may have been split up into small groups and trafficked across borders, beyond rescue.

How to fight this?

Boko Haram claims to care about Islam and Muslims. The official name of their group is The Congregation of the People of Tradition for Proselytism and Jihad. Otherwise they appear to be beyond morality. They murder, kidnap, and rape civilians at will. It seems to me that the only way to defeat Boko Haram would be to strike at what they claim to care about.

Why not utilize retaliation as a strategy to rescue the kidnapped girls? Every day that the girls remain in captivity, strike at "the People of Tradition for Proselytism and Jihad." In other words, retaliate.

Yes, it's a horrible idea, but what is more horrible is doing nothing while these girls are raped and tortured and as they lose any hope of rescue.

What is equally horrible is the idea of a military rescue mission that would also entail civilian casualties and risk an escalation of conflict. Again, why is killing innocent civilians in a bombing raid okay, but retaliation not okay?


I'm asking. I don't have the answers. 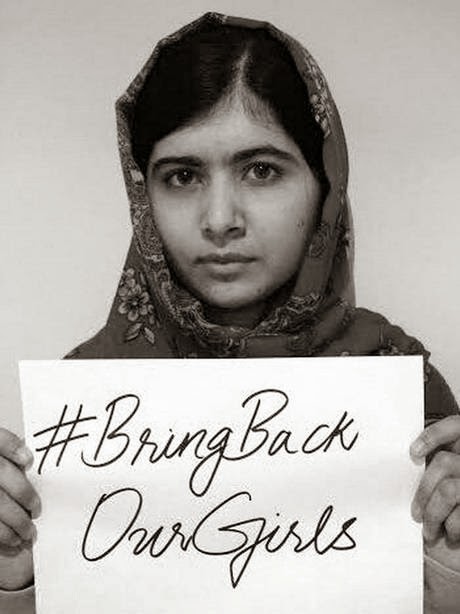