"The Revenant" 2015. I Laughed Out Loud at this Bloated, Pretentious Gore-fest 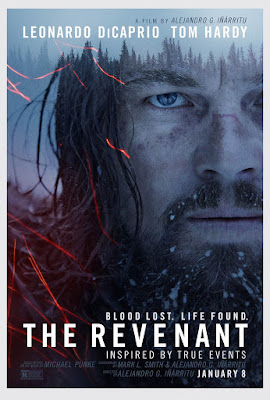 I laughed out loud several times while watching "The Revenant," a bloated, bigoted, pretentious, boring, gore-fest that begs to be parodied. "The Revenant" is so over-the-top, so ham-handed, I never, for one second, forgot that I was watching celebrated actor Leonardo DiCaprio straining toward his inevitable Academy Award nomination.

I never forgot that his nemesis was played by Tom Hardy, who was struggling to avoid being pigeon-holed as a pretty boy with bee-stung lips by playing an unrecognizable psycho villain. Director Alejandro Inarritu's didactic hand was all over everything. Normally I'm very squeamish and have to close my eyes during violent or gory scenes. There's as much blood in "The Revenant" as in a Quentin Tarantino movie. I didn't have to close my eyes once. In fact I laughed out loud over and over.

DiCaprio plays Hugh Glass, a real frontiersman (1780-1833). The movie version of Glass was married to a Native American woman and had a son by her. The real Hugh Glass was not. There is a skirmish between white Americans and Indians in the Louisiana Purchase. The whites leave the scene on foot. Glass is attacked by a grizzly bear. He is badly wounded. The party's commander leaves Fitzgerald behind with Glass. This makes no sense whatsoever. Fitzgerald has telegraphed that he is an unhinged, hostile, and aggressive bully who has openly threatened Glass. No sooner does the commander leave but Fitzgerald kills Glass' son and leaves Glass in a shallow grave, even though he is still alive.

Glass arises from his shallow grave and starts chasing Fitzgerald across what looks like the Grand Tetons. In fact the film was shot in Canada, the US, and Argentina. For many long stretches of the film it feels as if the whole point of the exercise is a long slog to find the most picturesque spot in which to bite off a live fish's head. Many shots consist of nothing more than DiCaprio, in heavy "I've been attacked by a grizzly" prosthetic makeup, staring into the camera, which was probably an inch away from his face, grimacing and grunting. If you don't like the sound of DiCaprio grunting, don't go see this film. All this grimacing and grunting builds up to the inevitable showdown between Glass and Fitzgerald. Cue the spurting blood.

Little of this is plausible. Glass is frequently seen standing in or walking through water and surrounded by snow and ice. Hypothermia would surely kill any human who attempted any similar stunt. The grizzly bear attack is plainly CGI. There is a much better grizzly bear attack in the 2009 romantic comedy "Did You Hear About the Morgans?" That film used a real bear, not computer-generated pixels.

"The Revenants"'s director, Alejandro Inarritu, was recently interviewed on NPR. He whined about how very, very hard it is for him, a Mexican, to live in the racist United States. He's a Hollywood millionaire. He won multiple Academy Awards for "Birdman," a movie few people saw and fewer people liked. Inarritu is very Caucasian in appearance. But oh boo hoo he has to live in the horrible, racist United States as a Mexican!

Inarritu also whined about the evils of colonialism, which he hoped to highlight in his movie. Because, you know, it's really a bad thing when men hurt, punch, knife, shoot arrows and bullets into, rape and stab others. But, it's a really wonderful thing when Inarritu makes a film showing all these actions in gory, graphic detail, and makes a bucket-load of money marketing those very violent images. Nothing like sincerity and purity of artistic intention.

"The Revenant" is overtly anti-Christian. Tom Hardy's psychopathic Fitzgerald is the one kind of interesting character in the movie, He is just about the only one who talks. DiCaprio mostly just grunts and grimaces. Though the characters are slogging through the high Rockies, Hardy has Fitzgerald speak in a British-actor-working-under-a-Mexican-director's movie-version of a Southern accent. Southerners should sue Hollywood – why are psychopathic bad guys so often Southern? Even in the Grand Tetons? Anyway. Hardy speaks in this nearly indecipherable faux Southern accent. He's a mean, weird, unmotivated, hostile villain. He talks about God and Jesus constantly. The message is very clear. The white man's God is evil.

A character named "Toussaint" rapes an Indian woman. "Toussaint," of course, means "all saints." I wonder what Inarritu thinks of what Comanche used to do to white women captives. Google it. And don't blame me if what you discover gives you nightmares.

Glass gets through his travails through repeated visions of his Indian wife, who was, of course, murdered by evil white men. In one vision, Glass sees his son in a destroyed Christian church. There are paintings of Mary and Jesus, distorted by decay. Trees grow in the church. Trees are sacred, see. The church was just evil brought by the white man to hurt the Indians.

At a key moment in the film, a key character makes a profound decision based on whispered Indian wisdom.


Yes, not only are Native Americans spiritual and loving, they also know how to use combs. In "The Revenant" the Native Americans have groomed hair, while the whites all have stringy hair hanging in their eyes. Frontiersman needed their eyes – certainly to aim their rifles – and combs are easy to make. The unrealistic hair is just more evidence of the director's heavy-handed strain that took me right out of the movie.
Posted by D Goska at 4:11 PM