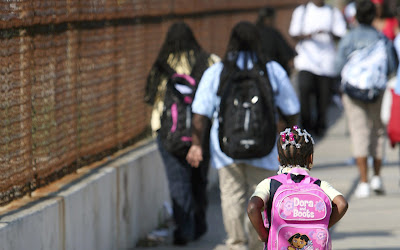 For about a week now NYC metro media has been awash in a story of an 18 year old girl gang raped at gun point by five teens.

The young men allegedly pulled a gun on her father, told him to leave, and raped the girl.

The accused teens are named Denzel, Onandi, Shaquell, Ethan, and Travis. You will not be surprised to learn that they are African American. Few members of other ethnicities name their kids Shaquell.

The first time I heard this story on the news, my immediate reaction was, "I don't believe this. There is something fishy here."

Why? Why did I have that reaction?

It actually took me a while to examine the facts that were being reported and put two and two together and understand why I was suspicious, why I had that reaction upon hearing this story that I used to have when listening to Soviet-era media: I need to decode this, to see how facts are being used to service some agenda, and seek out authentic facts from underground media, and then examine those facts in turn.

First of all, and I'm going to sound very conspiracy theory here, the Brownsville rape story broke just after the Cologne migrant sex attacks story, and it seemed too perfect. "See?" NPR seemed to be saying. "Americans commit horrible sexual crimes, too."

Brownsville. What do we know about Brownsville? Brownsville has the highest concentration of public housing in the nation. It has one of the highest murder per capita rates.

Do I believe that an 18 year old girl living in Brownsville is going to a public park at *9 o'clock at night* in January when it's already been dark for four hours?

I do not believe that. I live in a neighborhood with lots of public housing and lots of violence. I do not go to public parks at nine pm in January, and when I walk past them I do not see 18 year old girls in them. Never. Ever.

Second thing I did not believe. Potentially controversial, I know.

Do I believe that an 18 year old girl, given Brownsville's demographics, probably African American, is with her father?

I do not believe that.

I know I'm not supposed to say this.

I don't see children with their fathers among my African American neighbors.

I see *young* children with *mothers.*

It is so rare for me to see an African American mother, father, and children together that I take note of it when I do see it.

Hispanics? Hispanics I see *constantly* in family groups. Constantly. I could look out my window right now and see Hispanic mother, father, kids, maybe an uncle. Going to the Falls together, going shopping together. Some invisible glue unites them.

I see: Women with little babies.

So, I didn't believe the "18 year old girl with her father" part of the story.

What has transpired since the news just broke.

NPR is NOT reporting this. They *are* reporting the initial allegation: girl gang raped by five boys with a gun who chased away her father. They don't report this part. That's censorship.

The alleged rapists are saying that they found the girl having sex with her father in the park. The police say they have no evidence to support this charge.

The alleged rapists say that they have cell phone video of the girl, half undressed, consenting to sex with two of the alleged assailants. The police acknowledge some video but say it is brief.

Further, store owners and customers say that when the father asked for help, he was so drunk he was incoherent.

Further, the girl has apparently never even met her father until recently, is not living with her mother, and lives in foster homes.

The girl allegedly bit a police officer who attempted to rescue her from the alleged rape.

The girl protested that she has PTSD and bipolar disorder.

At this point nobody knows if any of this is true.

Why I mention this.

I have taught young people like this. Young people whose life resembles a long tumble in a washing machine -- up, down, here, there, no father, mother disappears, living with auntie, living in foster homes, drugs, casual sex, abortions, no concept of love or the sacredness of intimacy or of their own bodies.

They have been screwed over by society. By *everybody* on the right and left alike.

Yes, I think that old fashioned values and expectations punishments and rewards are the *only* thing that will save abandoned and betrayed children like this.

Yes I think that the liberal message of "White people are rich and privileged and evil and your only salvation is to take their riches through theft or welfare and anything bad that happens to you today is caused by the slavery that ended in the mid nineteenth century" is poison.

All these kids are just as human as you or I. And they could be rehabilitated through old fashioned values.


More Al Sharpton style liberal whine whine gimme gimme or Ferguson style rioting... might as well be a neuro toxin in the water supply.
Posted by D Goska at 6:33 AM