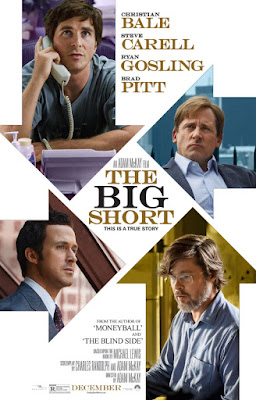 I walked out of "The Big Short" experiencing that unique high I get from an excellent movie. As much as I loved "Spotlight," I really want to see "The Big Short" win the 2016 best picture Academy Award.

I don't know anything about money and I rarely see movies built around finance. "The Big Short" is all about men's cut-throat competition with each other in a world as testosterone-fueled as the military or professional sports. Its virtuosic filmmaking is what glued me to the screen, ready to learn, laugh, and, yes, cry.

A barefoot man in a t-shirt is pouring his heart out, in an utterly unselfconscious way, to another man, who is wearing a suit. At the end of the conversation, the man in the suit timidly asks, "So, do I get the job?" It's a surprising and very funny moment. It tells us about the childlike soul and lack of social skills of the casually dressed man. It's quick and it doesn't beat you over the head. Either you caught the depth and the humor in the scene, or you didn't.

Next, we are in a support group of some kind. A member is sharing a personal heartache. Another man bursts into the room. He is talking loudly. He drowns out the first man. Everyone stares at him in anger and disgust. The rude, oblivious man makes himself a cup of coffee, and then uses his cell phone and leaves the room. He is one of the most insensitive, obnoxious people you've ever seen. The movie tells you his backstory, and it's so complex, and so heartbreaking, that you fall in love with this character.

"The Big Short" seduced me through terrific writing that captured characters in quick, deft strokes, and made me care about those people, people who are human just as I am human, and, through my caring about their humanity, made me care about their very alien world. I have no money and don't understand how it works. They play with billions of dollars before breakfast and then go to strip clubs. Masterful filmmaking.

The supernova cast puts the story across. Ryan Gosling, Brad Pitt, Christian Bale, Marisa Tomei, and every secondary actor is superb, like Jeremy Strong as Vinny Daniel. The one performance that made me sit up and want to shout, "Hold everything!" is Steve Carell as Mark Baum. If you cherish the experience of being so moved by art that it changes how you view a person and how you view the world, you will want to go to see "The Big Short" just so you can see Steve Carell's performance.

"Mark Baum" is a fictional hedge fund manager inspired by a real person, Steve Eisman. In the film, something tragic happens in Baum's life. That event is fictional. It didn't happen to Steve Eisman.

This is what is not depicted in the movie, at the request of the Eisman family. The real life hedge fund manager Steve Eisman had felt that he had an angel on his shoulder that looked out for him. He felt that nothing bad ever happened to him because of this angel. This is what common mortals like us assume about the superrich – the Richard Cory fallacy. One night, a nurse hired to look after Eisman's newborn son, Max, rolled over on top of Max in her sleep. Max was smothered to death. Eisman changed after that.

That's the character Steve Carell plays in the movie – a man touched by tragedy. He is the moral gravitational center of "The Big Short."

"The Big Short" knows that it is selling something few viewers will want to buy. The 2008 economic crisis was caused by very complicated financial manipulations. Many people, including me, don't understand it. Too, people want to lay the blame on their villains of choice. Left-wingers want to blame greedy Wall Street oligarchs. Right-wingers want to blame Democratic politicians who won votes by making unfulfillable promises and greedy, lazy borrowers.

"The Big Short" addresses the difficulty of its subject matter by occasionally reverting to docudrama mode. It breaks the fourth wall. Ryan Gosling plays Jared Vennet, a character based on Greg Lippman, aka "Patient Zero," that is, the first person who saw the crisis coming and figured out how to capitalize on it. Gosling is a supremely charismatic actor. He turns to the audience and explains what is going on onscreen. Because this is a Hollywood movie and not a science class documentary, he uses stars like Selena Gomez and celebrity chef Anthony Bourdain to educate the audience in what all this financial mumbo jumbo means. For example, Bourdain, in a restaurant kitchen, says, "What if I buy too much fish. I chop it up and resell it as fish stew. It's not old fish; it's new stew." That's how wheelers and dealers resold bad mortgages.

Too, the characters onscreen are often confused by what is going on in their own financial world. Steve Carell as Mark Baum is one of those confused figures. He needs other characters to explain to him. Gosling explains by bringing wooden blocks to a meeting. The blocks represent "tranches," or financial products. As each tranche is pulled away, the entire structure becomes weaker, and collapses.


"The Big Short" is intriguing enough that it made me want to read about the 2008 financial crisis. It's easy to find articles online, like one by Michael Grunwald at Politico, stating that the film is incorrect in its depiction of that crisis. Even if Grunwald is correct, that the movie made me want to read more about the crisis is testimony to its achievement.
Posted by D Goska at 7:38 AM