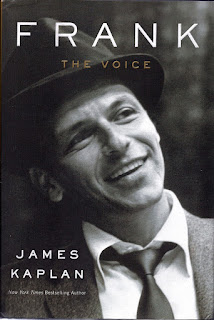 James Kaplan's "Frank: The Voice" offers an intimate portrait of a truly weird human being, a portrait as deep as anything you might read in an Ancient Greek tragedy. Sinatra's life was intertwined with the lives of major entertainment figures like Bing Crosby, Gene Kelly, Louis B. Mayer, and of course Ava Gardner, as well as Mafiosi, and politicians. This book offers a panoply of life in mid-twentieth-century America.

I'd read two previous Sinatra books: Kitty Kelley's "His Way: The Unauthorized Biography of Frank Sinatra" and "The Way You Wear Your Hat: Frank Sinatra and the Lost Art of Livin'" by Bill Zehme. The Zehme book, as the title suggests, is a light-hearted guide to gentleman's style, as mentored by Frank.

The Kitty Kelley book filled me with revulsion. The Frank in those pages is a creep, more of a tabloid headline, and a social climber desperate for fame, than a worthy artist. Two anecdotes from the Kelley book stand out: how badly Sinatra treated his friend and songwriter, Jimmy Van Heusen (the Norman Rockwell painting anecdote) and how badly Sinatra treated Humphrey Bogart's wife, and then widow, Lauren Bacall.

Kelley mocks Sinatra's Hoboken accent and his elocution lessons. Kelley quotes someone who knew young Frank "He spoke with deze dem and dose diction. He had a terrible New Jersey accent, but it didn't show in his singing. It's like the Japanese who sing English and sound just like us. If you can string it out into syllables, it will sound right, and that's what Frank did, I guess." Kelley also mocked the indecipherable Southern accent Ava Gardner had when she first arrived in Hollywood, and her autobiographical statement about "picking bugs off of tobacco plants." Kelley quoted an MGM producer who dismissed Gardner as a profitable no-talent. "She can't act, she can't talk, but she's a terrific piece of merchandise."

In short, the Kelley book reflects one major stream in the American response to Sinatra. Sinatra, in the Kelley book and in the mind of many Americans, was a sleazy upstart with all the wrong pedigree: he was from New Jersey, a contemptible state, he was Italian-American, his mother was a sometime abortionist. Trash.

James Kaplan's "Frank: The Voice" leaves Kelley's bio, and all contemptuous dismissals or trivialization of Sinatra, in the dust. Anyone interested in Sinatra and indeed in twentieth century American popular culture will want to read this book. It is probably the most detailed, well researched biography of Sinatra that we will ever have.

As I read the book's final pages, tears flowed down my cheeks. Though I was mere pages away from completing the book, and eager to do so, I had to close it and turn away and think about many things.

I was astounded by this. The book had made me feel as if Sinatra were a fellow human. Given how extreme Sinatra's biography is, and how loathsome his behavior all too often was, that Kaplan was able to wring tears from me was a remarkable accomplishment. To see the humanity in a remote character is a profound accomplishment of good writing.

Kaplan keeps his sentences short and easy to understand. He eschews big words, and mocks one writer for apparently using a thesaurus. Kaplan's style is almost pulp fiction, it is almost film noir, but it is not that artistically ambitious. Rather, it is the rat-a-tat-tat style of who-what-when-where-why journalism. Whether he is describing Sinatra doing something cruel, kind, or self-destructive – like slitting his own wrist – Kaplan just reports what happened, and makes almost no attempt to embellish, analyze or moralize. At first, I found Kaplan's lack of literary ambition off-putting; I love beautiful writing. By the end of the book, though, the mere accumulation of facts themselves was moving enough for me. I didn't need pretty prose.

There are many dirty words in this book. It opens with a description of Sinatra's childhood home, "Guinea Town," as "s - - - - flecked." Kaplan interjects the name of God as an expletive, and he uses the f word. We all know why. Sinatra spoke this way, as did his milieu.

Sinatra screwed around. Epic screwing around. Screwing around while single, while married, while his friends were in the next room. He used fans, fellow megastars, and prostitutes – "blond, brunette, and brown sugar" – in singles, doubles, and with friends. He thus hurt the women he loved and it's undeniable that he hurt himself. Frank loved Ava; Ava dumped Frank, so she said, because she knew he could not be faithful.

Kaplan makes zero attempt to plumb the moral depths of this ravenous, epic screwery. I kept craving that – I really wanted to hear someone say, "This level of debauchery may sound appealing but it causes much human suffering. What was going on with Frank that he needed cheap hookers when he was married to the most beautiful woman in the world?" But Kaplan never raises the question. He does, though, describe Frank's relationship with the shrink his friends forced on him after one of his multiple suicide attempts.

Kaplan details Frank's early years as the alternately abused and spoiled son of Dolly Sinatra, a local mover and shaker, and silent ne'er do well Marty. Frank was emotionally unstable, oversexed, and immature from the start. He was also talented and ambitious. His early career as a singer was meteoric.

And then it all came crashing down. Sinatra was hugely talented, and, when it came to his art, very hard working. Suddenly, none of that mattered. Professional blow followed professional blow. As much as you might hate Sinatra the creep, you can't help but admire Sinatra the dogged artist who refused to give up when maybe only his first wife, Nancy Barbato, still believed in him. And you can't help but think that maybe you had been too judgmental of that friend whose life went south. It can happen to the best of us, no matter how hard we try.

At the same time that Sinatra's professional life was crashing, he was falling in love with, divorcing his wife for, marrying and feuding with MGM film star Ava Gardner. Their affair is out of a bestselling novel or a Broadway play.

The received story is that Frank and Ava was one of the great love affairs of the twentieth century. To me it read like cockroaches mating. They drank. They smoked. They fought, sometimes physically. They cheated on each other. They publicly humiliated each other. He was utterly obsessed with her. The image of him drinking alone with her photograph, tearing up the photograph, then getting on his knees to put the pieces back together, then mourning because he could not find her nose, then rejoicing when a delivery boy bringing more booze stirred up a breeze that brought the nose floating down, then Frank giving the delivery boy the gold watch he was wearing – it's operatic.

I hated Ava Gardner while reading this book. Her great asset was her beauty, and she did nothing to earn that – it was an accident of birth. Unlike Sinatra, she had no art she cared about. Kaplan quotes her as saying that her favorite thing to do was "nothing." That's all too believable. Gardner comes across as a selfish, shallow, non-entity, just a bundle of selfish and temporary appetites spun together in an all-too-attractive form. She doesn't even rise to the level of being interestingly evil.

The one person I could like is Nancy Barbato Sinatra, Frank's first wife. I don't know if in real life she was the saint she is depicted as here, but in all the partying, successes, failures, show business, Mafia ties and politics herein, she is the one "fixed foot," the one stable, human, loving presence. The event that made me cry in the final pages involved Nancy Barbato Sinatra and a St. Genesius medal. Nancy's gesture, in a world of Hollywood fakery, is human, and truly exemplary of the word "love."

"Frank: The Voice" is 800 pages long. Never have I cared less about the length of a book. It is only part one of Kaplan's bio. It ends with Sinatra winning the Academy Award for "From Here to Eternity."
Posted by D Goska at 7:52 AM