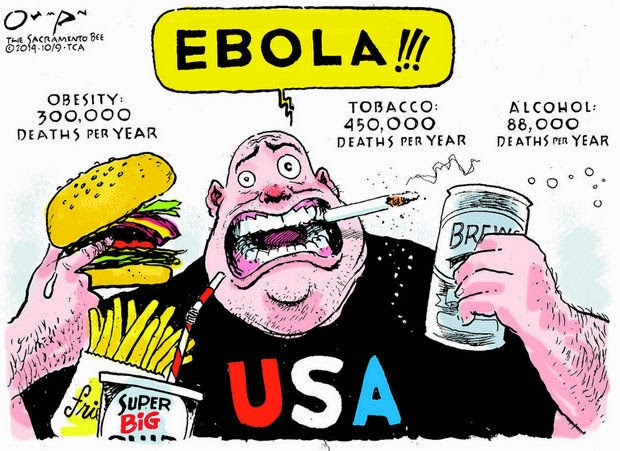 "It's really interesting how when Ebola was common in Africa nobody cared about it but now that it's common in white countries there is a vaccine and a cure."

The student who said this to me is a good student. He is intelligent, hard-working, courteous, and curious about the world. We were conversing on an American university campus in mid-October, 2014, during the worst Ebola outbreak in history.

I responded to this student, "Ebola has never been common in Africa. The death toll is in the thousands, not the millions. Ebola is not common in white countries. There is no vaccine. There is no cure. There are lots of incurable diseases that strike lots of white people."

I despair at how American racism distorts discussion of a health crisis, and cripples competent response to that crisis. The American racism I'm talking about is exemplified by my student's fallacious beliefs. Here are a few more examples.

The day before this conversation, on October 14, a Facebook friend posted a photograph of an African boy, his face vivid with emotion. Underneath a text read, "In this African tribe, when someone does something harmful, they take the person to the center of the village where the whole tribe comes. For two days, they say to the man all the good things that he has done. The tribe believes that each human being comes into the world as good. But sometimes people make mistakes. The community sees those mistakes as a cry for help."

I pointed out that a very quick Google search immediately exposed this text as a hoax. It contained words meant to be from an unnamed African tribal language; in fact the words were the first and last names of the author of a textbook on waste management; some "African" words were cribbed from Spanish. The idea that an unnamed and distant African tribe deals with evil in a way superior to Americans is a manifestation of the concept of the Magical Negro. The Magical Negro is a stock character in American fiction and film. He exists to help the white main character.

I mentioned to my Facebook friends that the post offended me. It treated Africans as fundamentally different from Americans, and so different and distant that it wasn't even necessary to name the very tribe that was meant to deal with evil in such a superior way. I mentioned that this mattered to me because I had served in Africa with the Peace Corps. I had come to realize that Africans are human beings just like Americans. Africans are not worse than Americans, nor are they better.

On October 9, 2014, the Sacramento Bee published a cartoon of an obese, bald, stupid-looking white male. He wears a t-shirt with the letters "USA" written across the chest in red, white, and blue. The man is smoking, eating a burger and fries, and drinking beer. Statistics surround his head; the numbers indicate how many Americans die of obesity, smoking, and alcohol consumption each year. Above the man's head, a balloon contains the caption, "Ebola!!!" The implication is, of course, that white Americans are panicking about Ebola, but are unconcerned about their own rampant self-destructive behavior. Further, Americans are stupid and dangerously unstable. They panic and become hysterical without cause.

On October 14, The Independent (UK) ran an article entitled "What's Wrong with How the West Talks about Ebola in One Illustration." The illustration depicts black bodies in sickbeds. In one bed, there is a white body. That body is surrounded by reporters. The black bodies are ignored. The caption reads, "A death in Africa, or Asia for that matter, should be as tragic as a death in Europe or the USA." In fact the three US Ebola victims that are receiving so much media attention are not white: Thomas Eric Duncan was Liberian, Nina Pham is Vietnamese-American, and Amber Vinson is African American.

On October 16, Marlow Stern, in the Daily Beast, wrote that Ebola news coverage "strikes me as reinforcing the xenophobic, Old World line of thinking that Africa is the 'Dark Continent' where diseases emanate from."

In his October 18 Weekly Address, with the Orwellian title, "What You Need To Know About Ebola," President Barack Obama scolded Americans. "We can't give in to hysteria or fear because that only makes it harder to get people the accurate information they need. We have to be guided by the science. We have to remember the basic facts," nagged Obama. The implication here is, of course, that Americans are hysterical, panic-prone ninnies who need their president's wagging index finger to remind them that science is superior to hysteria and fear.

It doesn't take long in any given google search of the word to discover that Ebola was invented by Americans to murder or exploit Africans. A Liberian newspaper, The Daily Observer, published an article alleging that Americans invented Ebola in order to harvest organs from Africans.

We are talking about Ebola through the distorting filters of white guilt and Magical Negroes. White guilt, as Shelby Steele illustrates in his book of that title, is not about black people at all. Like the white man's burden narrative, white guilt makes the white man active and the black man passive, if not absolutely immobile. White guilt shines the spotlight on white liberal heroism, and reduces blacks to supporting players in the white man's drama. Blacks exist only to be pathetic, to be helpless, and to supply the white ego with a black object to save. Any problems that significantly involve black people are not to be talked about with the same clarity we devote to other problems. How do we talk about other problems?

On October 6, 2014, TIME magazine published a fascinating article about a medical crisis: parents who refuse to vaccinate their children. TIME fearlessly and unhesitatingly demolished the idiotic excuses parents give for not vaccinating. TIME boldly stated the danger such parents pose to wider society.

TIME went even further than that. TIME related the screwy decision not to vaccinate children with the mentality, values, and worldview of the anti-vaccers. Anti-vaccers, TIME pointed out, tend to be leftist, affluent, well-educated, and living in trendy, desirable locations, like university towns. Their "master of the universe" worldview prompts them to "think they know better than doctors…it's a community of 'Hey, I know better.'" But, TIME stated, "What they think they know just ain't so."

TIME goes so far as to psychoanalyze anti-vaccers "When people achieve a certain status, they think they're invincible. They think it will never happen to them, and if it does, they have resources to deal with it…People are trying to be the ultimate parents. Every piece of clothing and food is thought out, and vaccines fall into that category." TIME ends with prescriptions for how to reach anti-vaccers, prescriptions tailored to the demographic's income, education, and attitude.

That's how we should be talking about Ebola. In exactly the same fearless, fact-based, forthright way that TIME talked about the affluent, trendy whites who don't vaccinate their children.

When we do talk about Ebola that way, there are a handful of key facts that will receive great emphasis, emphasis they are not getting now.

First, a quarantine is not racist; it's rational. Ebola needs humans to travel. It can't travel on its own. The purpose of a quarantine is to deprive a virus of human hosts. A temporary quarantine on Liberia, Sierra Leone, and Guinea is to everyone's benefit.

As it happens, I myself came close to death in the Third World, while serving with the Peace Corps. I developed an acute streptococcal infection in a remote village several-days walk from any road with vehicular traffic. No one rescued me. I did not expect anyone to do so. I have always regarded my survival as a miracle; an atheist might chalk it up to chance. One of my fellow volunteers did die, and another came close to death. We regarded these events as the price we paid for our own choices. Because of my specific Peace Corps history, I cannot donate blood. Those rejecting my blood are not being racist; they are being rational and responding to microbes, not my skin color.

The sooner Ebola is deprived of new human hosts, the fewer people will sicken and die.

Westerners cringe when talking about bushmeat. How dare we lecture Africans, who are famously victims of famines, to limit their consumption of any food? This attitude is nonsense. It's obvious that an ecosystem that can support enough gorillas and chimpanzees for human consumption can feed far less finicky omnivores like domestic chickens, goats, and pond-raised tilapia. Legumes like peanuts supply a great deal of the protein in many African diets. Africans don't have to eat bushmeat, especially not primates, and they risk their own health – and ours, in our age of rapid travel – by doing so.

Consumption of bushmeat and suspension, during Ebola outbreaks, of traditional burial practices could be achieved through radio. Radio is very powerful in Africa. Radio played such a key role in 1994 Rwandan that radio broadcasters were convicted of genocide by the United Nations International Criminal Tribunal.

To maximize radio's impact, we need to speak plainly about a touchy reality. Many Africans do not believe what they hear from official sources. They cling to traditional beliefs and conspiracy theories. If a government spokesperson tells an African villager that he should abstain from bushmeat and not bury his deceased loved one with a traditional burial, and that he risks Ebola by doing so, that African will likely reject this information, and believe something else that he has heard through the grapevine, or from a traditional healer.

I think, again, of that illustration in The Independent article, the illustration of black people dying and no one caring, and one white person dying and the press attending. The illustration, as has been mentioned, is factually wrong, but it is haunting. Yes, we care about the Africans dying from Ebola, but our distance from them makes it hard for us to act on that care in any effective way. That distance isn't just one of geography; it is also one of belief. All the advanced medicine in the world is for naught if traditional burial practices are adhered to. When I served in Africa, I saw aid workers begging mothers to filter water through cloth, and to let it sit before consumption, so as to limit their children's exposure to schistosomes and other pathogens. The Africans I knew largely rejected the premise that invisible pathogens cause illness. They did not accept the authority of science. It was more attractive to adhere to traditional beliefs that associated illness with curses and magic. These attitudes can be changed, just as the attitudes of "master of the universe" anti-vaccers can be changed, but those who want to change them have to first acknowledge that they exist.


This essay appeared in the American Thinker
Posted by D Goska at 5:46 AM