The Most Dangerous Animal of All: Searching for my Father and Finding The Zodiac Killer by Gary L. Stewart and Susan Mustafa 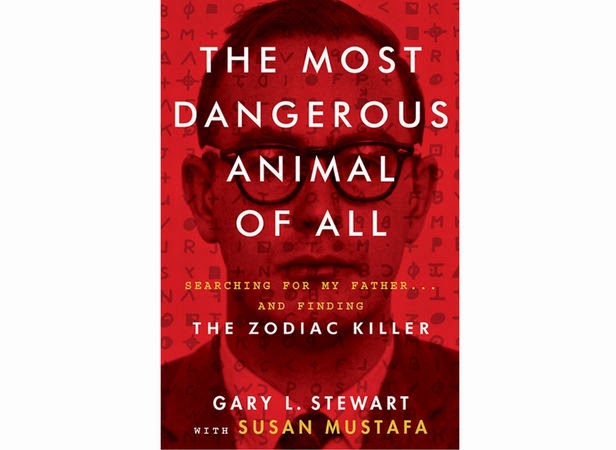 "The Most Dangerous Animal of All: Searching for My Father and Finding the Zodiac Killer" by Gary L. Stewart and Susan Mustafa is a beautifully written, gripping tale of family and murder. It's not just a true crime book. It's a memoir of an adopted man's reunion with his birth mother. It's a snapshot of deviant life in hippie-era San Francisco. It's a bit of kitchen-sink drama and film noir. It's about cops, what they do well and what they fail at. It's certainly a morality tale.

As a writer myself, I am in awe of Susan Mustafa's ability. There is a heart wrenchingly poignant scene where Gary visits his biological father's grave. There are chilling, clinical scenes of senseless killings. There is historical information concerning World War II and Jim Jones' People's Temple and legal points about adoption. Mustafa handles every bit of information, every type of scene, with the same "just the facts, ma'am, only the facts; moving right along" literary style. She trusts her reader to be able to master names, dates, and locations. She never sensationalizes.

Gary L. Stewart is a Louisiana businessman and electrical engineer. He was approached by his biological mother, who found him through a random search. His birth mother had been married to a prominent police officer. Police gave Stewart a mug shot of his birth father. "He looks like a serial killer," Stewart's son said. One day while watching TV, Stewart noticed a resemblance between a police sketch of the 1960s San Francisco Zodiac Killer, who was still at large, and the mug shot of his biological father. Stewart performed a great deal of research. Stewart reached the horrifying conclusion that his biological father was the Zodiac Killer.

"The Most Dangerous Animal" didn't fit solely into the true crime genre for me. I experienced it largely as a family tale. Steward was raised by two lovely adoptive parents. I felt frustrated by Steward's insistence that he had felt an emptiness inside and a fear of abandonment. He had great parents, parents I wish he had realized did fill that emptiness. I was frustrated by Stewart's immediate and unconditional love expressed for Judy, his birth mother, after she showed up.

The first hundred pages of the book are noir-tinged kitchen sink drama. Serial murder is such a sensational crime that one wants to believe that vast, Satanic forces create it. In fact Earl Van Best Jr, or Van, Stewart's father and alleged Zodiac Killer, did not experience melodramatic tortures before turning to crime. His life seemed to be the result of small, wrong choices. Many of those choices were made by women who couldn't say no.

Van's father Earl was an honored military chaplain. He rubbed shoulders with presidents and is buried in Arlington National Cemetery. Earl made the mistake of marrying Gertrude, a sexually promiscuous woman who humiliated her husband. Van told his cousins how he hated hearing the bed springs as his mother cheated on his father. Earl and Gertrude divorced. Earl remarried and had little to do with his son, Van, leaving him with his mother, Gertrude, and her boyfriends.

Van, at age 28, took up with fourteen-year-old Judy. Judy's mother Verda was also unsuccessful in her relationships with men. Verda's first husband spanked Judy so much sitting down was painful. Verda was then raped. She then married another man who abused her. Most of the first hundred pages of the book recount this steady trickle of small, wrong, personal choices that result in miserable lives.

I didn't like any of the people described in the first hundred pages. Judy, Van's fourteen-year-old wife, comes across as easy and lacking intelligence or character. She repeatedly returns to Van and lies and connives to do so. Van locks his and Judy's baby boy in a foot locker and closes the lid; the baby almost suffocates. This happens more than once. Judy does nothing to protect her own infant son from Van. Stewart argues that the Zodiac Killer's career was built around avenging the hurt Judy caused him. Such agony over such small potatoes.

The final portion of the book recounts Stewart's personal journey to becoming convinced that his father was the Zodiac Killer, and presents the evidence that drew him to this conclusion.

Whether Van was the Zodiac Killer or not, Van was certainly a reprehensible, unattractive, and pathetic human being. He committed a series of petty crimes, including check fraud and the selling of forged documents. He associated with unsavory San Francisco counter culture figures, including Anton Lavey of the Church of Satan and Bobbie Beausoleil of the Manson Family. Those who knew him describe him as a socially awkward person who was desperate to prove his accomplishments and intellectual superiority. He became an alcoholic and died in Mexico from choking on his own vomit.

Stewart's evidence includes the following: the resemblance between Van's mug shot and the sketch of the Zodiac Killer, similarity, attested to by a handwriting expert, between Van's handwriting and the Zodiac's, Van's scar, as seen in a fingerprint, and the Zodiac's, Van's fascination with the concept of killing people to accumulate slaves in the afterlife, Van's familiarity with the operetta "The Mikado," Van's familiarity with codes, what Stewart alleges is Van's name spelled out in Zodiac coded messages, and the physical appearance of the victims who bear a resemblance to Judy.

The best evidence would no doubt be a comparison of DNA between Stewart and DNA that may have been the Zodiac's, collected from stamps on Zodiac letters. Stewart alleges that he pressed very hard for the San Francisco police department to test his DNA, and while personnel there promised such a test, years went by without the test ever taking place. Stewart alleges that this is because his mother, Judy, married a prominent policeman. It would be too uncomfortable for San Francisco police to acknowledge that one of their own was married to the same woman who had been married to the Zodiac.


Books like this invite the reader to contemplate evil. If Stewart is correct, Van killed innocents because he couldn't hold on to Judy, because he was an unpopular kid, and because his home life growing up was less than perfect. Nobody ever tortured Van; he just had to deal with the same slings and arrows that we all have to deal with. He used his misfortunes as an excuse to see himself as a big, sad victim and very special person who had permission to do despicable things. Books like this are object lessons in the banality of evil.
Posted by D Goska at 11:55 AM