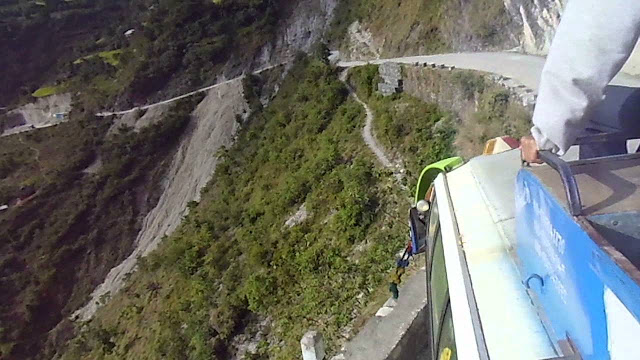 Back in 2013 I had not owned a car in almost thirty years. Then my sister was diagnosed with a terminal illness and given very little time to live. I wanted to spend as much time with her as possible, and help out in every way I could. I had to buy a car.

Driving again made me anxious.

Too, I was driving in *Paterson.*

There is a book called the DSM, short for Diagnostic and Statistical Manual of Mental Disorders. It lists all known mental diseases, from acute stress disorder to voyeuristic disorder.

Someday, I am going to publish an illustrated version of this manual. It will be illustrated with photographs of drivers in Paterson, NJ, demonstrating every one of the mental illnesses listed in the DSM – and doing so while driving.

Casually running a stop sign is child's play in Paterson. Turning left at a red light is standard. Green lights in Paterson do not mean "Go." They mean, rather, "Text!" "Groom!" or "Argue with your passenger while using outlandish hand gestures!"

Paterson drivers on crowded city streets regularly veer into the left lane of oncoming traffic and then squeeze into any space between you and the car in front of you in order to gain one car length of distance. You meet this person at the next red light, and the next, and the next. No matter. He is an hombre and he is from the Dominican Republic and he is not going to allow any gringa to drive in front of him.

And then there are the Paterson pedestrians who cherish and uphold a local cultural tradition of completely ignoring crosswalks and traffic lights and physics and defiantly walking in front of moving cars at the last minute – thereby making some important point about Civil Rights – not.

The other day I was behind a brand new Maserati, starting price: over $130,000. I see more brand new luxury cars in Paterson than any place else I've ever lived, but then I've never lived in a heroin shopping mall before. I'm a libertarian on drugs – I'm not a libertarian and I'm not on drugs; rather, I take the libertarian stance on drugs. I don't care if you want to ruin your life with heroin. But please select a designated driver if you're going to be on the same street as I after you shoot up.

My initial anxiety about driving didn't last. I shortly rediscovered that I love to drive – even in Paterson. It brings out my killer instinct. Can I win against pot holes and shouted threats? Can I win against the constant road blocks and fires and floods? Yes, I can, and when I do, I feel like Mario Andretti. My father loved to drive. I think I inherited it from him. There are moments when I'm driving when I suddenly feel his presence.

Three years into car ownership, there are still two New Jersey roads I am afraid to drive on.

Now, look. If you are reading this and you live in Montana, you are fixing to laugh at me. You drive on mountain roads all the time. I live in New Jersey, famous as a flat state (New Jersey is not really all flat, but let's just go with it.) Mr. Montana bold driver, I'll bet you drive a new car and have four-wheel drive. Me? My car is older than I am (in car years) and it was built for from-here-to-there driving, not stunts.

And I used to be a Peace Corps volunteer in Nepal, the highest country on earth. I was a schoolteacher out in the back of the beyond. I had to carry a full pack five days to get to my post. A fat girl who always got picked last in gym, I trekked to almost eighteen thousand feet. I traveled on roads that were as wide as the bus and whose edges plunged straight down thousands of feet to river valleys. I walked over foot bridges made of a little braid of plant rope and a hell of a lot of empty space. Make fun of me if you want, but, yes, I've been on some really scary roads, and yet the following Jersey roads still scare me.

Skyline Drive is steep. My little car huffs and puffs and, if conditions are right, it reaches about twenty miles an hour.

In the rearview mirror, I see an increasingly ever-lengthening caravan of Jeeps, Hummers, and other manly vehicles. I imagine them taking down my license plate number so they can track me down, tar and feather me. Skyline Drive is narrow as well as steep. These folks can't pass me. I wish I could just open up the floor of the car and stick my feet out and peddle desperately, like Fred Flintstone.

Then, it all goes in reverse. Skyline Drive is steep going up and coming down. Going down is much more fun. Then I wish I were a kid on a sled.

My real New Jersey road bête noir is the Driscoll Bridge. Right now, as I type these words, the soles of my feet and the palms of my hands sweat, and my gut goes cold.

My mother used to pack bologna sandwiches on rye bread and pack us up in the car and we'd drive to Aunt Phyllis' house down the shore. We'd pass all the New Jersey landmarks: the giant beer bottle, and … cue scary music … the Driscoll Bridge.

I'd squirm in the backseat.

I never mentioned how scared I was on that bridge. I think part of the reason I am so afraid of it now is that I am feeling the leftover unresolved fear from childhood.

A while back New Jersey's best birdwatcher invited me on a birdwatching jaunt down the shore. My first thought was not "Oh, goodie!" but, "I'm going to have to drive over THAT bridge."

Some bridges have vertical structures rising from their sides toward cables that run back down to the bridge. These structures fill the peripheral sight of the driver. The driver can feel that she is inside something, something like a web. It provides, as Gaston Bachelard called it, the illusion of protection.

The Driscoll Bridge lacks any vertical supports on its side. The driver sees nothing but sky in her peripheral vision. As the driver rises on the bridge's incline, in addition to seeing nothing to the left or right, the driver sees nothing in front of her. Just sky. On the Driscoll Bridge, you can feel like you are driving into the sky. Since you know your car can't fly, that means you feel like you are about to plunge into the Raritan River. That may be fun for some people. Sick people.

Finally, there is a road I am not afraid to drive on at all.

The Iceman kills you and hides your body. The Ghost Boy throws coins back at you. The extraterrestrials kidnap you and probe your anus. Chimeras do what chimeras do best. And the Jackson Whites menace you with large dogs.

Each one of these alleged threats requires a footnote.

Richard Kuklinski, aka The Iceman, was born in Jersey City of Polish and Irish immigrant parentage. His parents, especially his father, were very abusive. Sorry, no excuse. Richard grew up to be a contract and serial killer and a really vile POS. Kuklinski sometimes stored his victims in an industrial freezer. This was meant to disguise the time of death and thwart investigators.

It is said that Kuklinski buried one of his victims near Clinton Road. A vulture feeding on the corpse revealed the body to a biker. Investigators discovered signs of the freezing in the corpse, and Kuklinski was arrested and had to face justice.

The Ghost Boy allegedly hangs out in the waters where he drowned under the bridge on Clinton Road. You offer a quarter to him; he throws it back. I am unaware if he makes change. You probably have to buy some souvenir to get change.

Police and other credible witnesses reported UFOs on the Wanaque Reservoir in 1966. The sighting gained national attention. It was amusing to hear national nightly news anchors, who were the voices of God in those days, attempt to pronounce "Wanaque." Apparently the extraterrestrials moved operations a few miles west of the reservoir to Clinton Road.

The chimeras, or hideous, malformed beasts, are from the old Jungle Habitat, a short-lived West Milford theme park. Between 1972 and 1976, Jungle Habitat featured wild animals in settings visitors could drive through. A man was attacked by a lion and a woman was bitten by a baby elephant. Many animals had to be euthanized after contracting TB. After the park closed, people reported finding the carcasses of decaying wild animals on the grounds.

The fear of Jackson Whites is hardest to explain to anyone not from northern New Jersey. Even the term "Jackson White" is controversial. The preferred term nowadays is Ramapo Mountain People.

The RMP are long-time New Jersey residents. Their ancestors include freed blacks and Dutch settlers. Thus they all have Dutch last names and relatively dark skin. They have tended to intermarry with other RMP and to live in the northern, more wooded part of the state.

Many of my students are new immigrants from the Caribbean, South America, Europe, and Africa. Although they live in New Jersey, they have never heard of RMP – or the Founding Fathers, for that matter.

Other students, who were born in New Jersey of New Jersey parents, have heard of RMP and they are convinced that RMP keep large dogs, tote shotguns, and menace anyone who trespasses on their land. Since the RMP live near Clinton Road, the prejudices against them place them on Clinton Road.

Me? I'm not afraid of Clinton Road. You want to drive on Clinton Road at midnight without the headlines on? I'm game.

But I do have this one story to tell.

It was a bright, sunny day in that most frightening of environments: the adjunct office at a contemporary American university. No cold winds blew, no shutters banged, no shadows loomed, no mad scientists percolated, no Native American burial ground moldered beneath our feet and nothing went bump in the night. But I was about to encounter the macabre.

Nicole Kattowski, a straight A student, walked into the adjunct office. She was looking for a topic for her final paper.

"Write about whatever you want to write about," I said. "If you write about a topic that interests you, you will write a good paper."

"Great, then. Let's work on horror. We need to get more specific," I said.

"Okay," she said. "How about Clinton Road? You know, the Ghost Boy? The Iceman?"

"Okay," I agreed. "I want to familiarize you with peer-reviewed scholarship. Chances are we won't find a scholarly article specifically about Clinton Road, but I'm sure we can find one about horror."

We turned to some academic databases and found a very good article that would meet Nicole's needs. We printed it out and … the article had no eyes.

I mean, in the place where the letter "i" should have appeared, there was an empty space. I used those academic databases for years, and that computer, and that printer. Nothing like it had happened before or since.