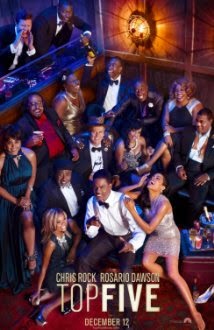 "Top Five" is billed as a romantic comedy. Chris Rock plays Andre, a movie star comedian; Rosario Dawson plays Chelsea, a journalist sent to interview him. Their relationship is not what I will remember about "Top Five," though. What I will remember: the words f---, m-----------, s---, the b word, the p word and the n word. These words constitute a good twenty-five percent of the script, as in "Hey, n word, would you like an f word drink?" "Yes, n word, I would like an f word drink." In other words, the obscenities are sprinkled throughout the script without adding any meaning.

Most of the female characters onscreen are vile, naked, prostitutes and strippers. There are many naked female body parts onscreen. These female bodies are there to perform simulated sex acts. They also rob strip club patrons, and hide their wallets in their private parts. After servicing a couple of men, they extort money by screaming "Rape!"

I don't understand why anybody made "Top Five." If you want to hear unfunny jokes whose only appeal is to those who think repeating the f word and the n word over and over is funny, and if you want to ogle naked female characters who are also made out to be nasty human beings, why would you go to see a movie billed as a "romantic comedy"?

Chris Rock knows he lives in a country where a white person could lose his job, his friends, and his social respect for using the n word. But he, Rock, can use it, because he is black. By using the n word repeatedly, he rubs his audience's face in the privilege to intimidate that he enjoys.

Chris Rock is one of the luckiest and most successful people on the planet. A good chunk of this film is Chris Rock complaining about being black. At the same time, he and the rest of the cast never stop hammering away at reminding the audience that they are black. We're black. We're different. We use the f word and the n word a lot. We speak Black English. We listen to hiphop. Taxis won't stop for us. Okay, okay, okay, Chris, we get it. You are black. Can you get on with the movie now? Like, can there be a plot?

The movie tosses a bunch of aborted plot points into a blender and presses "mash." You get alcoholism, reality TV, men obsessed with fat women, cheating, and hidden identities. None of these plot points goes anywhere. The movie always comes back to women getting naked for money, obscenities, and the n word.

As for the putative romance. Chris Rock is not sexy. He's skinny, googly-eyed, and his voice is unmodulated, loud and grating. Romances have been built around men who aren't conventionally attractive. See Woody Allen. But Rock can't carry it off. He's paired with a very desirable woman, Rosario Dawson. The movie seems to want to make her unattractive. She's given a butch, Cuban-political-prisoner hair-cut, with half of her head shaved, no makeup, and she wears the same dress through most of the film. Even so, she is out of Rock's league. The script does very little with their pairing.


And … comedy? I did not laugh once, and neither did anyone else in the theater. I guess if you find African Americans wanting to steal hangers from a hotel thigh-slappingly funny, this movie is for you. You might also enjoy Amos and Andy.
Posted by D Goska at 6:02 AM