"Secrets of the Koran: Revealing Insights into Islam's Holy Book" by Don Richardson 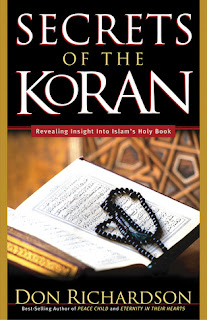 Richardson's main points: Richardson repeatedly emphasizes that the vast majority of Muslims are good people who often aren't even aware of what is in the Koran, as it is not translated, it is in a medieval Arabic, and it is so chaotically written it is borderline incoherent without the hadiths, or sayings, to clarify what verses mean. The Koran is so repetitious that if all repetitions were deleted, it would be 40 % of its current size.

The Koran is a unique among world scriptures. It repeatedly calls for jihad and repeatedly threatens a ghastly hell to anyone who doubts and does not obey without question. Islam was spread by the sword. Christians and Jews were crushed under Islam. Islam is making headway in Europe through its high birth rate and Europeans' low birth rates. Islam is making headway in America through Political Correctness, especially on university campuses. Students are encouraged to be hostile to and ashamed of Christianity, while not being taught about the Arab Slave Trade. The Judeo-Christian tradition is an important foundation of Western Civilization, and even atheists will regret it if we reject it.

Richardson offers a comparison between the Judeo-Christian God and Allah. God keeps promises and separates church from state. Allah is free to abrogate any previous statement, and can withdraw salvation even after death. Allah demands totalitarian power over church, state, and the entire planet.

There are at least 109 jihad verses in the Koran; one out of every 55 verses is a jihad verse. One in every eight verses is a threat of damnation. Hell is graphically described as a place with vivid tortures, like burning in fire till skin blisters off, only to be healed in order to have new skin to burn. By contrast, the Old Testament mentions Hell once n every 774 verses, and it is never described so graphically. Anyone who questions that Mohammed is a prophet, or questions that the Koran is divinely inspired, or refuses to battle for Islam, goes to hell.

Mohammed claimed himself to be in the Judeo-Christian tradition, and the Koran claims that the Bible confirms the Koran. In fact the Jews who knew Mohammed rejected him, and the Bible contains no confirmation of the Koran. Mohammed murdered many Jews and exiled Jews and Christians from Arabia, where they cannot live to this day.

Mohammed's versions of Biblical stories are garbled and include extra-Biblical folklore. Errors include the Koran mentioning the Exodus story 27 times but never including the Passover. Mohammed confused Haman, a Persian, with the Egyptian Exodus story which occurred 900 years before Haman. Mohammed mixes in elements of the story of the Tower of Babel, which has nothing to do with Haman or Egypt. The Koran's inclusion of extra-Biblical fables include God lifting up Mount Sinai and threatening to drop it on the heads of the Jews, and Jesus making clay birds fly.

The Koran does not depict Mohammed as performing any miracles. It also does not depict the Jews as ever attacking Mohammed. Rather, it was he who attacked, slaughtered, and enslaved them, and who took Jewish women captive as sex slaves.

Mohammed fought 47 battles and raided dozens of caravans. Captured females and booty were distributed to warriors, thus increasing Islam's appeal. Heaven offers abundant sex slaves to warriors. When the severed head of one enemy was tossed at Mohammed's feet, he said it was more acceptable to him than the choicest camel in Arabia. Warriors had to pledge fealty to Islam above all other ties; they were encouraged to massacre their own relatives.

Mohammed repeatedly ordered that his critics be killed; he ordered or supported at least 43 assassinations, including poets, women, children, and the elderly, half of whom were killed for criticizing Mohammed. Mohammed personally supervised the systematic beheading of hundreds of Jews.

Islam divides humanity up into two parts: the House of Islam and the House of War, or non-Muslims. Non-Muslims must be warred upon until they submit.

It is the Muslim's duty to make war on all infidels until Islam is dominant, ex 8:40. Peaceful verses like "Let there be no compulsion in religion" were abrogated – that is, canceled out. Allah threatens to obliterate faces and twist heads around on their necks. The Koran permits Muslims to enter the homes of infidels and steal their belongings 24:29. The Koran and hadiths recommend sex slavery.

Richardson says that "If the Koran makes full sense only in Arabic, it is not a revelation for all mankind." The Koran contains nothing comparable to the Good Samaritan story. Rather, the morality of the Koran demands that Muslims be nice to Muslims and not take infidels for friends. The Koran's support of slavery ravaged Africa and Europe – more than ten million Africans and over a million Europeans were enslaved. Castration was routinely practiced in the Arab slave trade, not outlawed till late in the 20th century.

"Secrets of the Koran" is an undisciplined rant. Richardson obviously has passion and courage, but his book cries out for an editor. He goes off on too many tangents and covers no topic adequately. He uses some good sources, like Ibn Warraq and Bat Yeor, but in other cases he cites anecdotes and Reader's Digest. He uses anecdotes when he should and easily could cite published statistics. He misses some authors he should cite. He shares unique insights, but is then clueless. He overuses italics, exclamation points, and rhetorical questions, and the book is repetitive. He succumbs to that Protestant failing, anti-Catholic bigotry. Richardson's insights on the Koran are valuable, but you could read better edited books offering the same information.

Don Richardson is also a painter. Here is some of his artwork, available as cards at his website here. 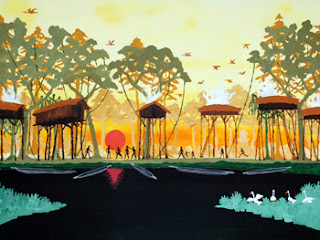 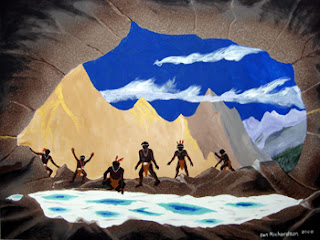 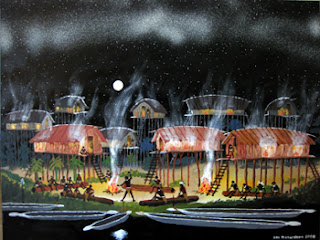