"I Heart Huckabees" Virulent Christophobia and Jewbu, or Jewish Buddhism 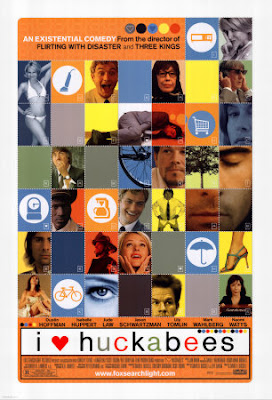 "I Heart Huckabees" is a quirky little 2004 movie that asks the big questions and makes you laugh.

I loved "I Heart Huckabees" the first time I saw it. My five-star Amazon review is currently "the most helpful favorable review" of the film.

I just rewatched "I Heart Huckabees" and remembered something I had chosen to forget about the film. There is a cold, nasty rock of virulent hatred nestled in the warm and fuzzy heart of this film. The movie hates Christians and Christianity.

"I Heart Huckabees" is all about the search for spiritual truth and the answers to life's big questions: Why are we here? Who are we anyway? Where are we going? Why bother?

The spiritual truth the film serves up is Jewbu (sometimes Jubu or Buju).

Albert (Jason Schwartzman) is a sad sack schlemiel. He writes bad poetry and leads an Open Spaces coalition that is trying to save a wooded plot from development by the Huckabees superstore chain.

Albert's enemies are the wealthy, attractive, and successful Brad (Jude Law) and Dawn (Naomi Watts), who work for Huckabees.

Albert tries to improve his pathetic life by hiring therapists Vivian (Lily Tomlin) and Bernard (Dustin Hoffman). They pair Albert up with another seeker, Tommy (Mark Walberg), a fireman who despises America's dependency on petroleum. Tommy was traumatized by the 9-11 terror attacks, and that is why he hates petro-dependency so much.

Catarine Vauban, a nihilist, seduces Albert. Albert begins to think that maybe life has no meaning at all. But Vivian and Bernard, with their profound insights, rescue Albert, Tommy, Brad, and Dawn. Happy Ending.

"I Heart Huckabees" is a very funny screwball comedy. It gets its laughs from the pain of life and man's search for meaning.

The Big Answers that "I Heart Huckabees" provides to the Big Questions are Jewbu, or Western Jewish interpretations of Buddhism.

The spiritual answers "I Heart Huckabees" offers are picked from pop Western understandings of Buddhism: it's all one, or non-duality, your enemy in this life could have been your mother in a past life, reincarnation, karma, meditation, koans, and even transcendence through being smacked in the head (from Zen Buddhism).

The Jewbu of "Huckabees" is part of a significant trend of Western Jews adopting a Westernized, cafeteria-style "take what you like and leave the rest" Buddhism. Notable Jewbus include Allen Ginsberg, Leonard Cohen, Jon Kabat-Zinn, Goldie Hawn, Steven Seagal, Sylvia Boorstein, etc. 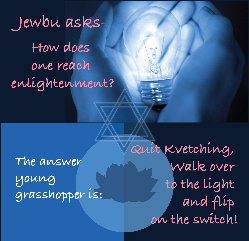 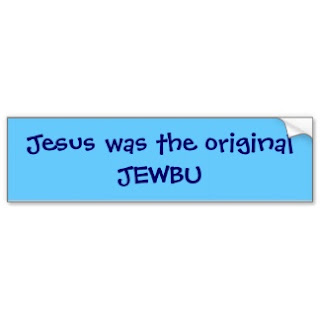 Judaism is admirable and rich. If I were not a Christian, I might very well be Jewish. There is so much to love in Judaism. Evil people tried to wipe out the world's Jews. It depresses me to think of influential people like Allen Ginsberg not doing everything they can to bring Jewish tradition into the present and future, but adopting a foreign tradition.

As I said in "Save Send Delete," I've known a lot of American converts to Buddhism who were looking for something that existed in their own tradition but they didn't know it was there.

Huh? Did you know not of your own traditions of spiritual depth or compassion or transcendence or even really cool costumes in Judaism or Christianity?

"I was looking for a religion that was cool and not hated or nerdy."

Yeah. For some reason Buddhism, in the West, now, has that cachet as the cool religion. And there are all too many people who hate Christians and Jews. I think that that is one reason so many Jews convert to Buddhism. Buddhism is cooler.

Anyway. Buddhism offers profound insights and those insights are well deployed in "I Heart Huckabees." So far so good.

It's the virulent hatred of Christians in the film that I found harder to stomach on a second viewing.

The first time I watched the film I enjoyed it so much and decided to just shelve the way its Hate Christians scene made my skin crawl.

Here's the scene: Albert, the loser-seeker, and Tommy, the fireman, as part of their search for meaning, end up having dinner with a Christian family father (Richard Jenkins) mother (Jean Smart) son (Jonah Hill) and daughter. The Christian family has adopted a Sudanese orphan (Ger Duany).

The family is eating spaghetti with no sauce, white bread, and milk. All white food, get it? White! Bad!

And they are evil. They are stupid. They are hostile. They are obnoxious. They are responsible for 9-11, because they support the use of petroleum.

Christians have played a big role in helping the victims of the genocide in Darfur, Sudan. While the rest of the world ignored it. "I Heart Huckabees" takes genuine good work that no one else wanted to do, including Buddhists – helping the helpless in Sudan – and turns it into something ugly. Christians helped Sudanese so that they could make fun of them at their dinner table.

David O. Russell's Christophobia here is wretched. It is ugly. It is hate. He's a mini Goebbels in this scene. And I did love the rest of the movie.

It's weird for me, as a Christian, to love a popular American cultural product so much, and then to come across scenes like this, and have to sort of edit them out in my brain as I watch.

I think of how gay people feel when they are enjoying a cultural product, and suddenly encounter homophobia, how Muslim friends feel when they hear words like "Islime."

I'm listening to the director's commentary on the DVD. Russell does identify "I Heart Huckabees" as his response to 9-11. Interestingly, he never mentions Islam in the film at all. 9-11 was caused, in his worldview, by bad, bad white American Christians. And the problems can be solved by his interpretation of Buddhism.

My Amazon review of "I Heart Huckabees" is below:

Me? I loved "I Heart Huckabees." I loved it so much I can't even review it. I loved every performance, every line of dialogue; I loved it so much I want to form a club with others who loved this movie ... Normally, I can't stand Jason Schwartzman, and even he didn't ruin it for me.

How can you tell which camp you'll fall into? Here's a test. Agree or Disagree with the following statements:

1.) My friends and family tell me I think too much, and that my life would be much easier if I would just relax and not rock the boat.

2.) I've tried meditation, but gotten sidetracked when I found myself imagining taking a machete to people who annoy me.

3.) I could pick Franz Kafka out of a line-up that included Jean Paul Stare, Simone de Beauvoir, and Buster Keaton.

4.) The thought of sex with a nihilist leaves me contemplating nothingness, and yet strangely aroused.

6.) I once lost a girlfriend / boyfriend to someone who was cover-model pretty / handsome, but had no soul, and that, yet again, caused me to think too much, and then to meditate, and then to imagine the whole machete thing.

7.) I think that the objectification of women is shallow and obscene, and Amish bonnets turn me on.

8.) Dustin Hoffman does a faux friendly, "I've got your nuts in my cracker" smile better and better as he ages.

9.) Lily Tomlin is reason enough to see any movie.

Give yourself as many points as you want for each "yes" answer, and then give yourself an equal number of points for each "no" answer. Cause, you know? It's all one.
Posted by D Goska at 6:37 AM