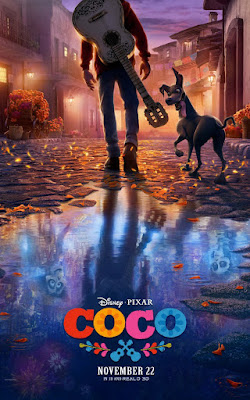 "Coco" is one of the most beautiful movies I have ever seen. It's a feast for the eyes. I don't think there is a single scene where fluorescent orange, purple, and lime green are not onscreen at once, complementing each other beautifully. The songs are enjoyable and well sung. Each character is fully realized. Miguel Rivera, a little boy, is the lead. He is adorable to look at and charmingly played by newcomer Anthony Gonzalez.

The plot is a bit complicated and I'm not sure that children would understand it. The theme is an adult one: how do you balance love of family and tradition with innovation and self-actualization? I'm not sure kids would fully grasp that, either. But there is enough onscreen business – chases, animals, and costumes – to keep children entertained. The plot has much in common with "The Wizard of Oz." A child travels to an otherworldly realm, and is accompanied by an earthly companion who is transformed into a magical creature in that realm. The child faces dangers and learns lessons he can apply once he returns to normal life.

I was deeply moved by the movie. I had tears running down my face during the final segment. The plot twists astounded and gratified me. This film had more of a plot than many an adult movie I've seen recently.

Yes, "Coco" is an anti-Christian movie. Though it takes place in Mexico, I could not find any vestige of Catholicism in the film. I may have blinked and missed it. "Coco" creates both life in a Mexican village and a Mexican afterlife, and I saw no churches. There was a place named "Santo" something – that was the only sign of Catholicism I caught.

There are many signs of Aztec belief. Skulls are everywhere, as they were in monumental Aztec architecture and in images of Coatlicue, the Aztec goddess. Chrysanthemums, the Aztec flower of the dead, are also omnipresent. A very bad character has a very Christian name. I can't say more so as not to reveal any plot twists. And "Coco" presents its own, pagan-inspired afterlife. Spirits remain "alive" as long as someone on earth places their photograph on a pagan altar called an "ofrenda." After that, they really die. And spirits are accompanied by alebrijes, brightly colored chimeras. Aunt Imelda's alebrije is a winged, horned, jaguar.