"The Conjuring 2" 2016 Un-Scary Schlock, But Vera Farmiga is Great 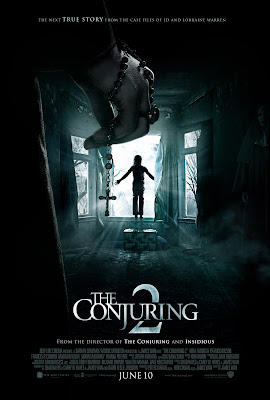 I'm easily frightened by movies. I've never been able to get through Disney's "Pinocchio." "The Conjuring 2" is one of the least scary movies I've ever seen. I laughed out loud several times. I thought it was so ridiculous, heavy-handed, absurd, over-the-top.

I was actually scared during one scene. Patrick Wilson, as paranormal investigator and allegedly Catholic anti-demon commando Ed Warren, wades into standing water underneath a suburban home. Everyone knows anyone who wades into standing water in a domestic setting risks being electrocuted. Alas, the only menace Warren faces is the cardboard outline of a standard-issue specter who rolls up behind him. Boo!

The other scary factor: how old Franka Potente, who plays paranormal investigator Anita Gregory, has gotten. Back in 1998's "Run Lola Run" Potente was the embodiment of youth. Now … she's in her forties. Scary.

I honestly don't know what filmmaker James Wan was trying to achieve. Was he really trying to make a scary movie, or was he trying to make a meta-commentary on how schlocky scary movies can be? I hope the latter, because that is what he has achieved. The saving grace of the film is the presence of Vera Farmiga, an actress who deserves so much better than this, but who shines like sterling amidst the dross.

"The Conjuring 2," just like the original "The Conjuring," is based on an allegedly true story. In 1977, in Enfield, England, two sisters, 11 and 13, claimed to be experiencing demonic possession. They were the child of a single mother and lived in a council house, that is a government welfare house. There was video footage proving that one of the girls was faking.

Never fear. Ed and Lorraine Warren, an American couple who sold themselves as real live paranormal investigators and exorcists, showed up.

"The Conjuring 2" wallows in 1970s nostalgia. That there even is such a thing as "70s nostalgia" is evidence of the demonic. The men all wear wide lapels and wolfman sideburns. There is a lot of emphasis on retro tech, like bulky reel to reel tape recorders – the kind that actually could capture Satan's voice, whereas today's handheld digital devices just don't pack the same punch.

There is a loooong pointless scene where Patrick Wilson, as Ed Warren, treats the possessed children to an imitation of Elvis Presley singing "I Can't Help Falling In Love with You." Watching this endless scene, I really wondered what was going on with James Wan, the director. Is he tired of cheap, teen horror and does he want a career as an artiste and auteur?

"The Conjuring 2" is really hard to look at. The allegedly haunted Enfield council house is visually repugnant. There are threadbare, royal blue chairs on a threadbare, royal blue rug. If you have any taste at all, you know what horror I dare invoke with these words. Everything in the house is begrimed. It looks as if a toddler had been rolled in molasses and car exhaust and then set loose on every fixture. And of course the family is so poor that they can't afford a single one-hundred watt bulb. The house is kept at forty-watt level throughout the film.

The allegedly scary stuff: kids levitate and speak in deep voices. A scary nun appears. If you've ever gone to Catholic school you are laughing as hard as I was at this point. The nun looks so much like Marilyn Manson that I'm sure his lawyers are asking for their cut of the film's box office.

There are some cinematic classics in the horror genre. James Whale's Frankenstein is indelible. "The Haunting" from 1963 is one of the most profound and disturbing films ever made. These films are about so much more than James Wan's bag of tricks, which consists of sending an impaired person into a dark space – say, Patrick Wilson after he's been partially blinded by escaping steam from a broken radiator, having that person stumble about, holding the camera on one spot for a long time, and then having a scary nun pop suddenly into the frame. Horror classics have something truly menacing and challenging behind the costume.

There is something truly scary behind "The Conjuring 2" and behind the Amityville Horror, another Warren cause celebre. In both cases, we are talking about broken families. We are talking about kids who have troubled relationships with their parents, or absent parents. Shenanigans like the Warren's obscure the real facts that really need to be addressed. At least two of the children who grew up in the Amityville home say that they were abused by their stepfather. We were so busy looking for demons in that house we couldn't see the kids being hurt.

Another disturbing aspect of this film. I'm really sick of James Wan's exploitation of Catholicism, a religion he evidences zero respect for but loves to exploit in order to plump up his box office. Wan is constantly tossing crucifixes, rosaries, and clerical garb onto his piles of junk. Ed Warren, in "Conjuring 2," references the Catholic Church so many times it is monotonous. Wan is from Malaysia, a Muslim majority country. He is himself Chinese. I do not see him denigrating Islam or Confucianism in his films. He wants to avoid any risk of true horror.

I review "Me Before You" here and "Free State of Jones" here.
Posted by D Goska at 1:17 PM