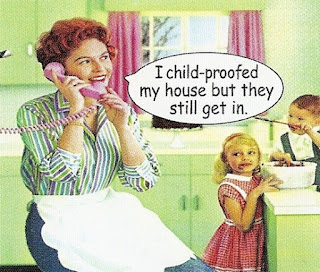 I've read variations of this post maybe a hundred times by now: "You can't judge Michelle Gregg, the mother of Isaiah Dickerson, the three year old boy who climbed into a gorilla enclosure at the Cincinnati Zoo.

Young children move quickly. She could have looked away for just a second.

You can't judge her. She did nothing wrong. She bears no responsibility. It's hard being a parent.

Parenting is the hardest and most important job in the world. Nobody can judge parents. Parents never do anything wrong, and they are not responsible even when they do. So shut up."

"One day my attention slipped for one minute and my toddler had swallowed all my valium and we had to have his stomach pumped. You can't blame me! It happened so fast!"

"One day I was engrossed in an Oprah episode and I accidentally dressed my baby in barbecue sauce, garnished him with gingered carrots and cilantro, and stuck him in the microwave on 'high' for ten minutes, remembering to rotate halfway through. Don't judge!!!"

Confession: these posts may as well come from Mars, they are so foreign to me.

Years ago, I read an anthropology text called The Functions of Folk Costume in Moravian Slovakia. It was about life in a small village in my mother's homeland. I knew from her stories that in small villages, people police each other. If you cross the line, your neighbors let you know.

The book said that when a woman committed adultery with another woman's husband, the cuckolded wife would chop off the cheater's braid and nail it to the door of the church.

That will get people's attention.

Unfortunately, vigilantes have gone so far as to threaten her. I hope and pray that that stops, and that law enforcement keeps Gregg safe.

I don't want to see any revenge taken against Michelle Gregg.

I would like to hear an apology from Michelle Gregg. A resolution to be a more attentive mother. A word to other mothers to be similarly attentive. An offer to pay whatever damages she can afford to pay.

And then we forgive her, and move on. No threats. No lambasting. Forgiveness.

My guess is that she hasn't apologized because she believes she did nothing wrong. Her Facebook posts and public statements seem to suggest as much.

Also I'm guessing that she probably will sue the zoo for millions of dollars, and if she acknowledges any responsibility, that would sabotage the golden ticket her negligence may have delivered to her.

Recently Japanese parents disciplined their seven-year-old son, Yamato Tanooka, by leaving him alone in the forest. In this brave new world where parents never need take responsibility for any mistake, I suddenly feel the need clearly to state: this is very bad parenting.

In contrast to the Harambe story, Takayuki Tanooka, father of the abandoned boy, issued a heartfelt, tearful. public apology. I actually cried.

"My excessive behavior caused my son such pain and inconvenienced so many people. For that I am deeply sorry. The very first thing I said to my son was, 'I am so sorry for having caused you so much pain. Daddy is really sorry.' We have raised him with love. I admit what we did was excessive. I had no idea it would end up like this. I deeply regret my excessive behavior, but I did what I thought was best for him. We loved him before, but I hope to give him even more attention now." There's much more. It's heartbreaking. (Source)

You may be thinking, "Yeah, but, this is the putz who left a seven-year-old boy alone in the forest. Should we take anything he says seriously?

My answer: It doesn't matter whether he is a callous jerk and what he is saying is merely for show, merely in response to societal pressure.

It matters that he said it.

It matters that his neighbors will be watching him like a hawk, and watching his son, as well.

It matters that the state will be keeping tabs on this son.

It matters that this man knows that he lives in a society where if he screws up again, there will be hell to pay, because Japanese society, based on Confucian values, puts a premium on the parent-child relationship.

So it doesn't really matter if, deep inside, he is an uneducable putz. His society matters.

What society surrounds Michelle Gregg and Deonne Dickerson? A society that says "You can't judge parents about anything. Parents never make mistakes. Don't be so judgmental."

Anne Marie Hochhalter, a survivor of the Columbine Shooting reports that Sue Klebold, the mother of one of the shooters whom I would prefer not to name, wrote to her, the survivor.

This survivor made the letter public. That letter is below.

Anne Marie Hochhalter wrote back to Sue Klebold. She forgave Sue Klebold. That's astounding. Even more, she expressed compassion for the pain Klebold must feel for having a son who committed such a heinous crime, and then committed suicide.

Taking responsibility. Apologizing. The "Never blame parents for anything" camp will never experience either, because they decline to take responsivity for their actions.

Full text of the letters between Sue Klebold and Anne Marie Hochhalter are below.

Our prayers have been with you each day as we read about the terrible ordeal you and your family have experienced. We read that you had been transferred to Craig Hospital, and we were so thankful that you had progressed to the point where you could enter a rehabilitation facility. Though we have never met, our lives are forever linked through this tragedy that has brought unspeakable heartbreak to our families and our community. With deepest humility we apologize for the role our son, Dylan, had in causing the suffering you and your family have endured. Your recovery process will be a long and difficult road, and we hope that the support of people all over the world will help you find strength and courage as you meet the many challenges you have yet to face. When we read reports of your progress, we marvel at your resolve. It is still terribly difficult for us to believe that the son we knew could play a role in causing harm to you and others. The reality that he shared in the responsibility for this senseless tragedy is beyond our comprehension. We offer our love, support, and service as you and your family work to gain control over your lives. May God watch over you during your recovery process and beyond. May each day bring you successes, however small, that bring you hope and encouragement.

"I think it's appropriate that the program that you are appearing on is named "20/20". Hindsight is truly 20/20 and I'm sure you have agonized over what you could have done differently. I know, because I do the same thing with trying to think of ways I could have prevented my mother's death. I have no ill-will towards you. Just as I wouldn't want to be judged by the sins of my family members, I hold you in that same regard. It's been a rough road for me, with many medical issues because of my spinal cord injury and intense nerve pain, but I choose not to be bitter towards you. A good friend once told me, "Bitterness is like swallowing a poison pill and expecting the other person to die." It only harms yourself. I have forgiven you and only wish you the best." (Source)

Danusha Goska is the author of Save Send Delete

There is a shorter version of this essay at American Thinker here.
Posted by D Goska at 6:38 AM