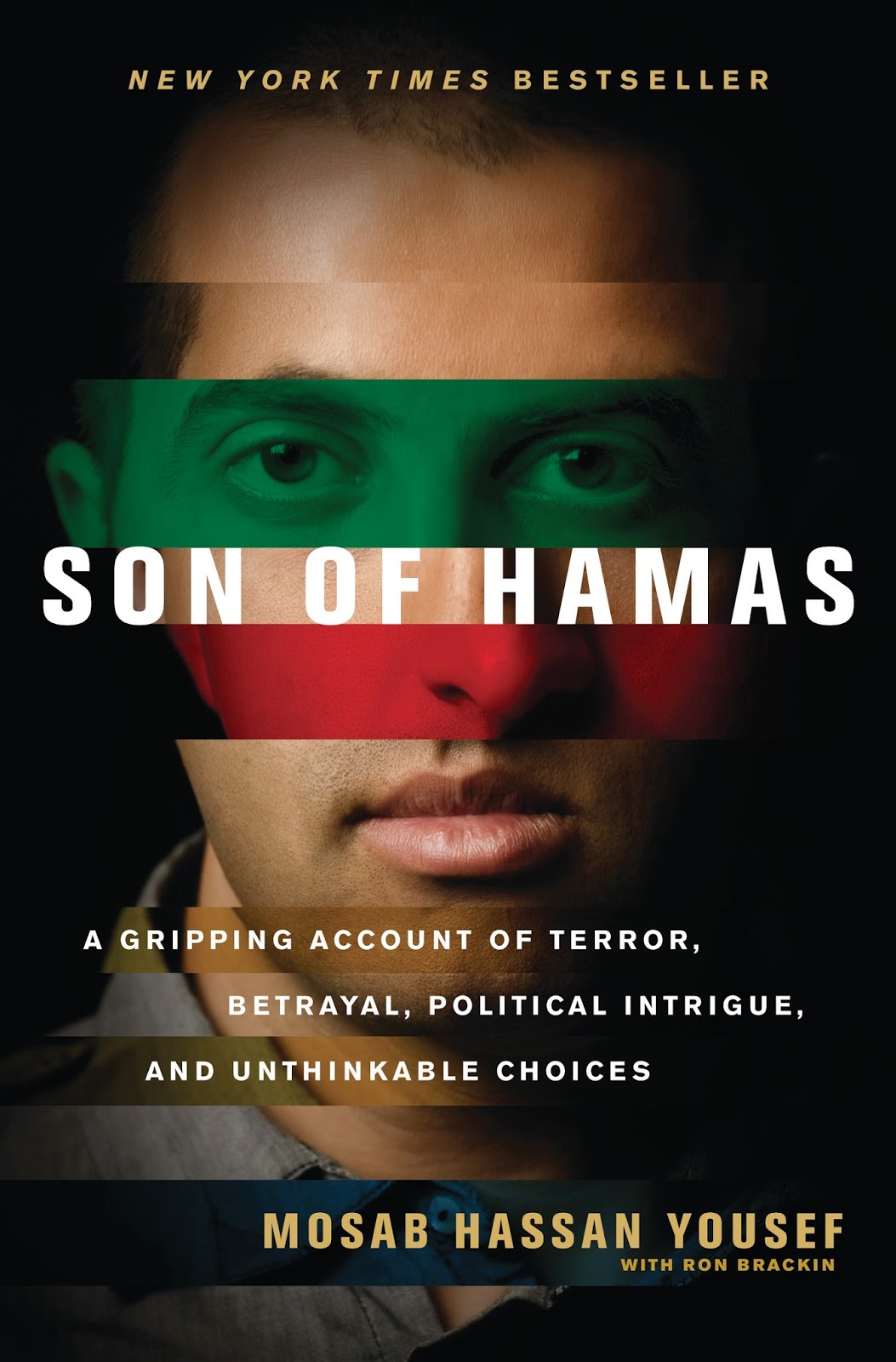 I posted the review, below, on Amazon in 2010, shortly after "Son of Hamas" first came out.

I'm posting it again now because Hamas is very much in the news.

I have Facebook friends who say "I'm not anti-Semitic but I am concerned about how Israel treats Palestinians."

I invite my Facebook friends who say this to be concerned about how Hamas treats Palestinians.

Mosab Hassan Yousef, son of a founder of Hamas, reports in his book, detailed below, that Hamas tortured innocent Palestinians.

"Son of Hamas" is a fast-paced, sensational, heartbreaking read. Mosab Hassan Yousef's story is unique and important, and he tells his story with frankness, tears, and outrage. He is the son of a founder of the Palestinian terrorist group Hamas; he himself was a prisoner, an Israeli spy, and, eventually, a convert to Christianity. The book is an easy read; you can finish it in a couple of sittings. It's really more of a long magazine article than a book, though. Neither MHY nor his co-author, Ron Brackin, delves deeply into the many complexities of the story. Rather, the book's focus is on recounting of this or that spy activity. From this book, I didn't gain deep insight into what it's like to be an undercover agent, to betray one's beloved father's ideals, or to convert from Islam to Christianity.

MHY's description of Hamas is scathing. The most memorable passages in the book describe Hamas members torturing other Palestinians in Israeli prisons. MHY worked as the torturers' scribe. He wrote their fastidious accounts of what the tortured inmate confessed to. These files read like pornography. Inmates confessed to unbelievable acts, acts that included cows and cameras. It was clear to MHY that these victims were making up stories to satisfy their torturers' twisted appetites, and to, thereby, make the torture stop.

The Hamas torturers focused on men who did not have outside protectors to avenge their torture. One poor soul, Akel, was targeted for torture because his only living relative outside prison was a sister who would not harm anyone in revenge for Hamas shoving needles under Akel's fingernails. Too, Akel was a "simple farmer" "never accepted by the urban Hamas" who took advantage of him. MHY describes a Palestinian prisoner throwing himself against a boundary of razor wire. An Israeli guard was about to shoot him. The man explained that he was not trying to escape the Israeli prison, but, rather, his fellow Palestinian inmates.

The bulk of the book consists of journalistic accounts of this or that spy operation. Clever ways are devised for MHY to meet with his Israeli handlers. Other clever ways are devised for MHY to avoid being detected as a spy, even as he meets with top figures like the PLO's Yasser Arafat. MHY thwarts suicide bombings and tries to make sure that terrorists are imprisoned, rather than killed. Fans of espionage may find these passages intriguing.

By chance, MHY runs into some Christians and begins to discover Jesus in the pages of a gift Bible. MHY left Islam and became a Christian. This made life completely impossible for him among his beloved home and family. He had to leave Israel for the US. Even that departure had to be orchestrated by Israeli intelligence.


The intense heartbreak MHY has experienced in his life is suggested in this book, but never plumbed. I wonder if he'll ever write a more probing, confessional book that will explore what must have been a very tough life. MHY's love for his father and his family is obvious. His family has disowned him; they have to. Islam mandates the death penalty for apostates. MHY was born into an impossible situation for an ethical being. He loves his father; his father supports terror. He loves his family; his family must renounce him for leaving Islam. He loves his homeland and his people; too many of his people are committed to pointless violence and are rigid in their resistance to any alternative point of view. I suspect that many readers reading this book will be moved to pray for MHY and his family as well. Readers will pray for his safety, of course, but also for peace for the many heartbreaks he has experienced, heartbreaks not of his own making.
Posted by D Goska at 8:50 AM