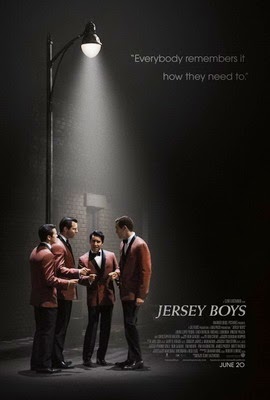 "Jersey Boys" is a sudsy, juicy, schmaltzy music biopic with a fake New Jersey accent. I'm from New Jersey and nobody here talks like that. The movie is fun and heartwarming but I liked it and didn't love it.

John Lloyd Young as Frankie Valli is the heart and soul of the movie. Early in the film the film focuses on Tommy DeVito (Vincent Piazza). DeVito is more of a small time hood than a musician and this part of the film plays like a goofy Mafia movie. Tommy wants to give a new band member one left shoe, telling him that he will be able to give him a right shoe later. Tommy gets these shoes by pilfering from transported goods.

There is a scene of Italian-American parents eating spaghetti and that feels clichéd. I grew up among New Jersey Italians and this aspect of the movie, to me, felt more as if it were inspired by Clint Eastwood watching films about Italians from New Jersey rather than his actually attempting to depict real people.

I wish there had been more focus on ethnicity in the movie. How did it feel to four Italian guys from New Jersey with Mafia ties and criminal records to become number one musicians? There is a scene where a producer tells them, "Come back when you are black" and slams the door in their faces. In another scene, Frankie's soon-to-be wife advises him on spelling his last name in a way that will lead to success. Yes, he should shorten his name, but he should be sure to end it in a vowel, because Italian last names must end in a vowel, unlike WASP last names. In still another scene she ridicules him as a WOP from NJ who never finished high school. There are hints of what it meant to be Italian in the 1950s, 60s, and 70s, but the movie doesn't flesh out this aspect of the story.

The movie really came alive for me through Frankie's relationship with his daughter Francine, and his taking the reins after Tommy DeVito's shenanigans cause too much trouble for the group. John Lloyd Young as Frankie Valli is poignant. He is physically small, as is Frankie Valli in real life, and he plays Valli as a relatively quiet guy, while Tommy is played as more flamboyant. It's rewarding to watch Valli come into his own.

Christopher Walken is simply wonderful as Gyp DeCarlo, a member of the Genovese crime family whom Valli identifies as a father figure. In real life, Gyp DeCarlo was a loanshark and murderer. The film romanticizes him.

For a movie that depicts the rise of a pop group, "Jersey Boys" doesn't pay as much attention as it might to music. The early part of the movie focuses more on petty crime, and later it's more about the dynamics of the band member's petty squabbles with each other and the women in their lives.

I wish more attention had been paid to doo-wap and other social and musical influences. The Four Seasons era, from the 1950s to the 1970s, is one of the most creatively fertile times in American pop music. None of that is addressed in any serious way. And I wish there had been more start-to-finish musical numbers, rather than song snips.


All in all, though, I really liked this movie. It's the kind of movie that makes you want to go home and google this or that strand of the story to see if the film is true to life. Apparently, yes, "Jersey Boys" is a very accurate bio-pic.
Posted by D Goska at 5:09 AM