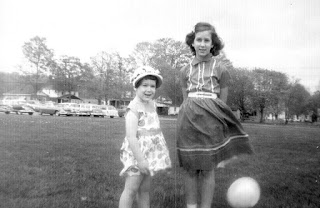 We used to make German chocolate cake for our birthdays, which fell close together, and were both on minor holidays. Hers on the first day of Autumn, mine on Columbus Day. We both loved fall so it was cool to share birthdays in fall.

When I was in the house after Joe died, I found extracts that had no doubt been purchased by my mother. It was so strange to pick up a bottle of Angostura bitters, which she kept on hand for stomach trouble, not for mixed drinks, which she did not consume. My mother, who died seventeen years ago, sought this out, selected it, paid for it, brought it home, and put it on this shelf, and it's been here ever since. Perhaps my hands are the first hands to touch it since her hands. Death is so mysterious. The bitters tasted just as good. Angostura bitters does not surrender easily to the pressures of time.

I still have some spices that Antoinette bought. About a month ago, I had to give up on many of them. I just knew I'd never use them. She bought nutmeg, I bought nutmeg. She bought hot pepper; I bought hot pepper. Was I going to use her hot pepper that she bought before she was diagnosed, almost seven years ago now, rather than my more recently purchased hot pepper? No. So, I finally threw them away, because it had finally gotten to the point where it did not hurt to throw them away. I didn't have second thoughts later and tearfully fish them out of the garbage can. Good. She would have thrown them away much sooner. Dry eyed.

I remember once going to the A&P on Ringwood Avenue. That A&P is no longer there. It is now the anonymous, barren landscape underneath an elevated superhighway, route 287. I grew up in a town without one traffic light and now there is a superhighway. And A&P declared bankruptcy and shuttered all its stores in November, 2015, seven months after she died. I'm not implying any connection.

Anyway, we would go to the A&P and do something that shocked both of us. Before we had taken the small package of Baker's German's Sweet Chocolate Bar to the check out, we actually *opened it up*!!!

This was shocking behavior. To open a product before you purchased it. We were such good girls. We were afraid we would "get caught." Some official person, larger than us and threatening, representing American authority, something we would poor, immigrant Bohunk children would never possess, would come clomping over to us and grab us by the scruff of the neck and carry us off to the institution for girls who opened products before paying for them.

But we had to do this. The recipe for the cake was on the inside of the wrapper. And you need the recipe while you are shopping because you need so much stuff. And if you don't get it all on this trip, when will you get it? The stores close – in those days stores actually closed. Sunday presented you with church and empty parking lots around closed stores. You couldn't suddenly decide to bake on Sunday. You had to shop in advance.

And people didn't have cars. Men had cars, and they used them to do manly things. Shopping for cake ingredients was not a manly thing. Women? Children? No cars. We probably walked the couple of miles to this store. So, yeah, you needed the recipe.

LOTS of eggs. You have eggs at home, of course. You need to buy another dozen. This is a German chocolate cake. Coconut. Pecans. A can of evaporated milk. Buttermilk.

For a while there I had a bit of a crisis. *German* chocolate cake? Was this really the best cake for Polish and Slovak people? The Germans were such bastards! I researched. I discovered that the chocolate had nothing to do with our invaders. It was named after its inventor, Samuel German, an English-American. An all-important apostrophe had been sacrificed to popular usage. Properly, it was *German's* chocolate cake. This was little comfort. What would people think?

There's a picture, somewhere, of Antoinette and me cooking in that little kitchen. I can see it in my mind's eye. She's sitting on a huge, overturned aluminum bread dough pan placed on the kitchen table. She's laughing and I'm smiling and reading the recipe to her. She was sitting on the table because the recipe said something like keep the bread dough tightly covered, and she figured that sitting on it would guarantee that it could not escape. We'd make jokes like this while we cooked. We'd extemporize little one-act comedies based on absurdities in recipes.

In improvisational comedy, the kind they do on "Whose Line Is It Anyway," the rule is "Always say yes." That is, if your partner suddenly decides you are about to do a parachute jump from a plane, just go with it. Antoinette and I, when we acted out these little routines, always said yes to each other. How did we manage these little islands of fun, amidst all the tension and the fighting? Dunno. Can't ask her. She ain't here. And if she were, and I asked her, she'd probably call me Soames and start speaking in Cockney accent, and I'd just go along.

I have no idea where that photo of us cooking together is, and since I'm the last one left, except for a distant brother who does not speak to me and does not want a picture of me or his other sister, nobody but me knows or cares about that photo.

In those days, we were poor and we were hungry all the time. We had enough calories. There was always mush on the stovetop. Sometimes you want to eat something other than mush.

So German chocolate cake was, well, it was a trip to heaven.

Now? So rich, so sweet, so much fat. I can't do it. Yeah, that's the reason. The fat content. Nothing to do with the tears camping on the rims of my eyelids right now at just the thought of German chocolate cake.

One of the saddest moments of my life.

This was years ago. I was living in Jersey. My birthday had come and gone a few days before, and I had received no notification from anyone to whom I am related. No cards, no calls, nothing. I expected nothing. Antoinette was going through one of her years of not talking to me. My mother, when I saw her, would tell me what a piece of garbage I was and that she regretted ever having me and that I should get out of her sight because just the sight of me upset her.

For some reason, I made a quick trip to the house. I hoped to arrive and leave before anyone saw me. The door was always open so this was easy to do.

I entered the house, opened the refrigerator, forget why, maybe out of habit, and saw, lined up there, in the back of the refrigerator, the ingredients for a German chocolate cake. The coconut, pecans, evaporated milk, and buttermilk, and the extra, as my mother would say it, in her Slavic-inflected English, "dozen of eggs." Never "a dozen eggs," but rather "a dozen of eggs," because of that genitive Slavic grammar thing. My mother spoke excellent English. When she did this, she was having fun with language. Injecting her native tongue into the language she was forced to speak because of that fated day that began on a flower-strewn ox cart and that ended with the nightmare trip into the hold of a ship that took her away from home forever.

So. It's decades ago, I'm on a stealth visit to my mother's house, to the very kitchen that used to be so warm when I cooked in it with my sister, it's a few days after my birthday, I open the refrigerator door, and there, lined up on the shelf, are all the ingredients for a German chocolate cake. Ingredients you can't buy accidentally. Ingredients you must purchase with intention. And if you don't use them, what do you do with them? Buttermilk? My mother had no other use for buttermilk.

My heart broke for her then and it breaks for her now.

In God through Binoculars I wrote,

"Love is the thorn. Love is the sleepless night. Fighting is not unbearable. It's actually fun. Like a lot of abused kids, I used to beat up other kids. It was a rush. This is unbearable: the boundary violation between love and hate and right and wrong. People who do wrong are trying to do the right thing. The most frequently repeated message in Twelve Step meetings, the thing we needed to hear over and over and over and over just to live out our daily lives, was not 'Poor you' – such words were rarely said. The thing we needed to hear over and over was, 'You can't save someone who doesn't want to be saved.' My parents' demons would never allow my love to reach them."

Mom, I hope, and I pray, that you have found in heaven the happiness that eluded you in life.

Antoinette, I miss you. Happy birthday.
Posted by D Goska at 8:19 AM