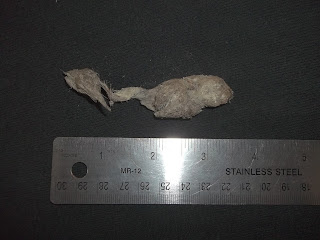 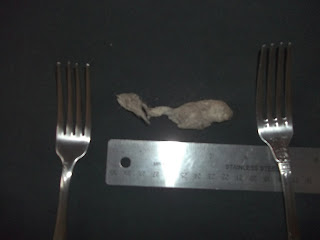 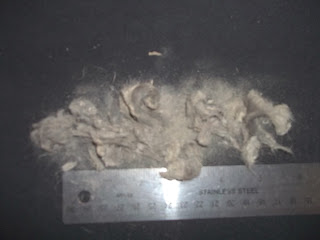 I had been birdwatching for decades before I saw my first pellet. I was hiking at Skylands with Mark S, a hunter who had once downed a deer with the first arrow he shot that morning. He looked down at Mount Defiance and said, "That's a pellet."

Now I see pellets at Skylands all the time.

Sometimes all it takes to see something in nature is to have someone point it out to you.

Birds need to be light, so that they can fly. Given their bodies' emphasis on lightness, they don't have many of the bodily organs that heavier animals have. Birds don't have teeth. They can't chew what they eat. Owls don't have crops, a bodily organ used to store food for later digestion.

Some birds, like ostriches, deal with the absence of teeth by eating pebbles so that they can abrade food in the digestive tract. Parrots eat clay so that they clay can absorb poisons from seeds. Lammergeiers or bearded vultures eat animal bones. Their digestive acid is very strong.

"The acid concentration of the bearded vulture stomach has been estimated to be of pH about 1 and large bones will be digested in about 24 hours, aided by slow mixing/churning of the stomach content. The high fat content of bone marrow makes the net energy value of bone almost as good as that of muscle, even if bone is less completely digested. A skeleton left on a mountain will dehydrate and become protected from bacterial degradation and the bearded vulture can return to consume the remainder of a carcass even months after the soft parts have been consumed by other animals, larvae and bacteria."

Discoverwildlife.com says "An extra-long intestinal tract helps the lammergeiers digest bone, as does their gastric acid, which has a pH of about 0.7, close to pure hydrochloric acid."

I usually dissect pellets in situ. I just take a stick and poke at them on the ground until I see the bones inside. The last pellet I picked apart had some pretty big bones in it. One was the size of a human knuckle bone.

I brought a pellet home from Garret Mountain yesterday. Boy, did it smell bad. I put it in the freezer over night hoping that that would diminish the smell. No such luck.

This one smelled like manure. I washed my hands several times after handling it. Good thing because pellets can contain viable rodent pathogens.

This pellet appears to be nothing but gray fur, with one little bitty bone, seen in the photo, above. Probably this bird, a hawk or an owl, had eaten a grey squirrel, or maybe a rat.
Posted by D Goska at 7:01 AM