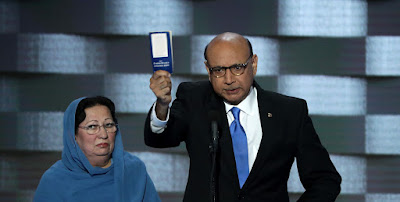 Khizr Khan and Ghazala Khan, parents of Humayun Khan spoke at the DNC.

Humayun Khan was an immigrant, a Muslim, and an American soldier killed in Iraq. He was a captain. He told his soldiers to stand back. He approached a suspicious vehicle. It exploded. Khan received the Purple Heart and the Bronze Star. Decent people honor him.

Donald Trump spoke disrespectfully of Ghazala Khan, saying that perhaps she was silent as she stood beside her husband because she is a Muslim. She made clear in a WaPo op-ed that she was silent because grief overcomes her when she contemplates her son's death.

Trump supporters are in denial, and are spreading a false narrative. They are saying that the Khan story is merely a "Clinton campaign talking point" and manufactured by the media sympathetic to Clinton.

This could not be more false.

There is a Tsunami of disgust coming at Trump over this. It is coming from the masses. It is not manipulated or manufactured by the media.

There is such a thing as American character. Americans cherish freedom, opportunity, and equal rights. Americans embrace that your achievements are more important than your ethnicity or religion.

Khan died defending his men. He died as a Muslim fighting other Muslims for the sake of the US.

Spitting on that is the biggest mistake you can make.

I honor the Khan family. That honor does not erase the truth of counter jihad. Jihad is an Islamic mandate. Not all Muslims follow it, but clearly the ones who murdered Captain Khan, and would have murdered his men, do follow the doctrine of jihad.

Donald Trump is not a counter jihadi. He is an intellectually shallow opportunist and pathological narcissist who jumped on the counter jihad bandwagon after San Bernardino. Before that he did absolutely nothing for counter jihad. He is a phony.

Counter jihad does not require the hate of Muslims. I don't hate Muslims. I find the Khan family very lovable.

Counter jihad is about saving lives.

Like the life of Martin Richard, an eight-year-old Catholic boy who, like Humayun, was blown to bits by jihadis.

Counter jihadis need to learn to communicate the truths of counter jihad to the American people.

Donald Trump is perhaps the worst face we could have on the educational and security mission of counter jihad.

Below, words from the report on how Martin Richard died. Captain Humayun Khan probably died in a similar manner. Counter jihad is not about hating Muslims. It is about saving the life of the next Martin Richard, the next Humayun Khan.

"Shrapnel - including small nails, plastic, pellets and wood - from one of the homemade pressure cooker bombs set off by Tsarnaev and his older brother had punched through the boy's 69-pound body. He suffered a six-inch-by-six-inch wound to his left abdomen, which exposed his intestines, and caused damage to his liver, left kidney, spleen and two ribs...There was also a perforation of his lower spine,' Dr Nields said, indicating that shrapnel had passed through the child's body and exited through his back…"

Love Muslims. Love everybody. Join the counter jihad. Save lives.
Posted by D Goska at 9:28 AM