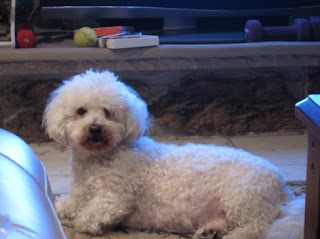 When I moved back to New Jersey after ten years in Indiana, my little voice kept insisting that I reconnect with Robin Seidenberg, a woman I had worked with before leaving NJ. Her name just came marching through my head.

I googled her and found nothing.

But my little voice wouldn't give up, so I googled her daughters' names, and discovered that she had remarried, and was now Robin Schaffer. So I contacted Robin Schaffer.

I was glad she was willing to talk to me because we had exchanged some harsh words in the past. It was when I was sick with that vestibular disorder, puking everyday uncontrollably, and just hard to be around.

Robin graciously utterly let go of the past.

I honestly don't remember what we did when we reunited some years back.

This is what I remember. I remember it so clearly I can see it in my mind's eye right now.

We walked into the kitchen of Robin's new house, and this fluffy white bundle of curls came rushing out and barked at us, and wagged his little tail, and circled our ankles. He was protecting his domain; he was ready for love.

I petted him and it wasn't easy to do so. He was quick and squirmy.

Robin told me that he was a Bichon Frise, and his name was Mercury. Robin likes Greek mythology.

Like other Bichon Frises, he had had some kind of muscular-skeletal problem, and if that ever came back, he would die. I hugged him all the tighter, realizing how fragile his grip on life was.

Robin had to travel a lot for business and she asked if I'd be willing to babysit Mercury.

Would I! Why not ask a kid to take over a candy store!

I can't even express to you how I feel about dogs. There just is no human word or human analog.

And I've been bitten. I was birdwatching on a jungle island in Thailand and a wild dog shot out from nowhere and took a couple of chunks out of my calf. Blood spurt for hours. I still love dogs.

Taking a dog for a walk is a spiritual experience to me. Sounds corny; no. The dog is experiencing the world through doggie sense, and you get to know some of that through the vibrations traveling up the leash. You commune with another consciousness; you connect with dimensions otherwise inaccessible to you.

I also loved giving Mercury a bath. He didn't love that so much.

But he endured it.

He's an all white dog! He needed those baths!

He would let me brush him for about five strokes, and then he'd squirm away.

I called Mercury "My little Frenchman." When Robin sent me emails asking how he was doing, I'd say, "He's kicking back, watching Truffaut films, smoking Gauloises, his black beret perched atop his head at a jaunty angle."

Merc was so not dog. He was fastidious, at times aloof. He rarely kissed me. Fetch? Feh.

And yet he would show his affection in poignant ways. Sometimes I would go for a walk, and the last thing I saw before leaving the house was Mercury sitting on the welcome mat next to the door, staring up at me through the window.

I'd return hours later and he'd be asleep on that uncomfortable welcome mat, forsaking his comfy bed, so he could be near the door when I returned.

Sometimes he didn't like it when I paid attention to other things, and not to him.

When I was housesitting for him after I broke my arm, and I was doing rehab exercises, he would stare at me and bark the entire time. "Why are you assuming those unnatural poses? Stop it! Stop it I say!" he seemed to be insisting. It made me laugh.

One day I had a rare intimate encounter. As Ted and I were entangled, Mercury stood on the floor next to us, barking and growling the entire time. Then he began chewing a giant hole in my sock. I still have that sock.

The most doggie thing he would do. Sometimes he would press his little paws into the floor, stare at me, and bark. I'd pound my feet into the floor, and he'd run. I'd chase him around the house. He loved that.

I have seen red-tailed hawks, foxes, and bears on Robin's property. I was very protective of Mercury. I never let him out but that I went out with him, and watched over him, ready for whatever tough guy Jersey suburban predators would attempt to make a meal out of his little lamby body.

When Mercury was diagnosed with diabetes I feared my time with him was at an end. I am so afraid of anything medical, including needles.

But I loved him. So I braved it. It took me forever to figure out how to get the needle into him.

My secret: I cut off a little chunk of Jarlsberg cheese to use as a treat after the needle. Mercury recognized this, and he focused on the cheese, not the needle.

Eventually Robin would return from her business trip, and it would be time for me to pack up my backpack and move everything toward the door.

Whenever I began to pack, Mercury changed. He would droop. He would not let me pet him. He would walk away. He would become deaf to my call.

Robin lives about a mile away from a pond. When I first started babysitting Mercury, I would walk with him the mile to the pond, walk around the pond, and then walk back. At the pond, Mercury ignored the other dogs as if they were beneath him. The one kind of dog he would happily greet: dogs as small, as white, and as curly as himself.

One time we did this walk, a walk we had done before, and Mercury was almost dead afterwards. Comatose. I felt so guilty. My God, I've killed him.

So, after that, we walked only to the next block, and quickly back.

Towards the end, I could barely get him to walk down the outside set of stairs so he could poop in the yard. Sometimes he'd poop on the top stair.

And I thought that's it. All the spunk has drained out of him. I'll never see any eagerness in him again.

But one day Von, who had grown up with Merc and now is an adult, dropped by for a visit. Mercury, who had been sleepy and sluggish all day, sprang to life, and licked Von all over.

Clearly, there was still life left in Mercury.

Von described to me exploring the woods with Mercury when Von was a child – when they were puppies together. "We'd spend hours together going through those woods."

But those moments, when Merc was perky, came fewer and farther between.

A few months back, I said to Robin, "When the time comes, I'd like to be there, if possible."

She looked at me as if I were absolutely crazy. I don't know if she was in denial, or if she thought I was being insensitive.

I wasn't there when Tramp died, or Artie, or Benjie, and it haunts me to this day. I wanted to be there for Merc.

Just yesterday I was thinking of Mercury.

I was thinking of a little moment, a little package, of happiness.

My life has been too damn hard for too damn long. In spite of that, I gouge out whatever happiness I can, and bathe in it, and not allow any darkness to enter it.

Yesterday, I was thinking of this absolute happiness: I am in Robin's living room. Before me is a set of glass doors looking out on high trees where red-tailed hawks prowl, and a stretch of lawn where foxes gambol and dead-man's-fingers rise up through the thick grass, banked by woods with raspberries. Next to me is a wood burning stove. I am seated on a bargello couch. A computer is in my lap. I am writing something, and I am going to get this something published, and the world will then know! Something.

Next to me is a little white dog. He's not as perky as he once was. His breath has become so rancid it could stop a truck. Mostly, now, he just sleeps. But he is next to me, and his presence is making me a better writer, and he is giving me happiness I would not otherwise have.

I checked my email this morning. There was a message from Robin. The subject line was "sad news."

Robin, you will go to heaven, if for no other reason, than that you gave Mercury one great life. 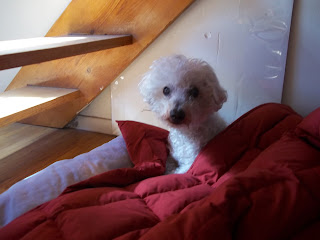 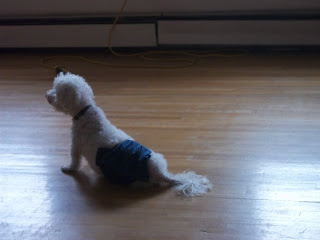