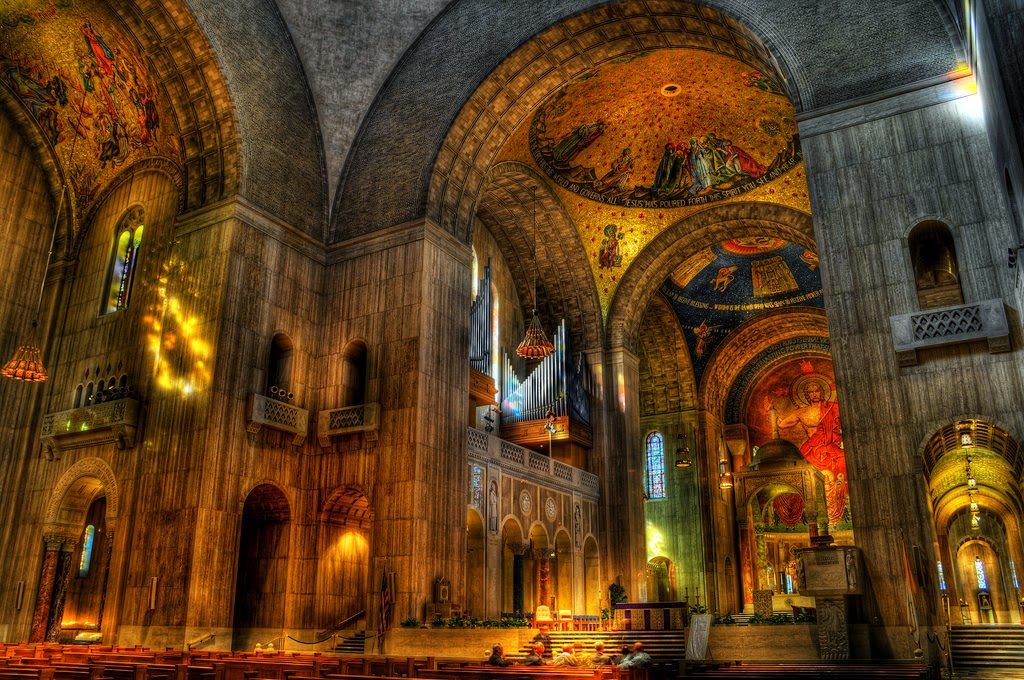 Ten years ago I made a retreat to Holy Cross Monastery in Berryville, Virginia.

I took a bus to Washington, DC, and hitchhiked to Berryville.

After my retreat ended, I visited two sights in Washington, DC: the National Cathedral, an Episcopalian church, and the Basilica of the National Shrine of the Immaculate Conception, a Catholic church.

The National Cathedral is much in the news lately for having hosted Muslim Friday jummah prayer on November 14, 2014.

Below is my diary account of my experience at the National Cathedral, and my subsequent visit to the Basilica.

The Simon I mention is my friend Simon Stern.

Fair warning: This is raw text from my diary and there is lots of swearing. I didn't edit this account.

Yeah, but, I realized, people need beauty cause they destroy the beauty God gives them. Paterson, NJ, is a little piece of minor hell exactly because of the behaviors of the Patersonians. It's not like we are placed on a geologic geyser that spews garbage and meanness; Paterson's citizens spew that up themselves.

Yeah, but, Sacred Heart cathedral is in Newark. I remember Daddy taking me there; God bless him. I loved it.

The National Cathedral is all that. It is a replica of a gothic cathedral. That it is primarily Episcopal is beyond ironic; I wonder if it is ever mentioned in any of its official literature that Henry VIII, in founding that church, encouraged desecration and destruction of gothic cathedrals? Or at least that's what I've heard; heard it in English class, where I was told that there may have been other Beowulfs; Henry's reformation ransacked Catholic monastery libraries. I don't know the facts here. In any case! Ironic, ironic.

Yeah, the National Cathedral is just perfect. Like a fucking gingerbread house is perfect.

Encounters: a well-dressed, WASPy looking woman with a snide voice, in the ladies room, told me that my backpack strap was hitching my dress up. (Again, the damn backpack.) That was true, but I was still washing my hands; I'd be fixing my hem in a moment. She was too quick to correct.

Again, a well-dressed, WASPy looking woman chased me into the sanctuary, and ordered me not to "wander around." I was behaving entirely quietly and reverently; I was still moving as if on retreat. She had zero reason to behave so meanly. "Are you a guide? Do you work here?" I asked, quietly.

"No, but you should not be wandering around this church."

I was wearing a denim dress I bought in a secondhand store, and carrying a backpack. This woman was wearing white pantyhose. She turned and began to stalk, huffily, away.

"Shame on you," I whispered, but loudly, I hope, enough for her to hear.

As the time passed, began to panic. Knew I had to find a computer to buy my Greyhound ticket home. Simon didn't have computer access at his apartment. I began to ask people in official garb if they knew of a nearby public library with internet access.

At one point, I asked a priest. He looked like he had stepped out of a Masterpiece Theater production: he was tall, very white, slim; his priestly garb was spiffy and fresh; he was handsome; though on in years – he was maybe in his fifties or sixties? – he looked entirely unscarred by life. I asked if he knew about nearby libraries. He said no, he was not local; he was about to drive home to New York. I thought, golly, has God just sent me a ride home? "Do you need a passenger?" I asked, eagerly.

He looked me up and down and laughed at me, out loud, and moved away.

Esprit d'escalier; wish I had said, "Excuse me for mistaking you for a Christian."

That was just my feel of the place. Chilly, ice box people in pantyhose and designer dresses and unscarred skins. The majority of stained glass windows or stone carvings I paid any attention to bragged of the accomplishments, and, often, the generosity, of this or that benefactor. I found nothing spiritual or inspiring in these artifacts, no matter their technical qualities as art.

The space window, containing a piece of moon rock, was lovely. Blue and black images are outlined in red; with the sun coming through, the red outline was vivid and beautiful.

Outside, I scanned the gargoyles to find the Darth Vader gargoyle. A docent walked by; I asked her for help. She had a French accent, and said you needed binoculars to really see him. I said, "J'ai mes jumelles avec moi," and she said, "You speak better French than I do." I get those compliments from the French, and I like it.

There were shadberries growing on the property; I ate some; they were good. Haven't had shadberries since Bloomington. I saw a black squirrel. I didn't even know that there were such things. An internet site claims that they are variants of gray squirrels.

Walked toward the Georgetown Library, keeping my fingers crossed. Did find a public computer; did buy a Greyhound ticket. A beautiful young African American reference librarian gave me great directions to a metro stop from which I could get a train to the Basilica of the Immaculate Conception. Her directions were really good, in that they were accurate, and when I said I'd as soon walk a bit to get to a good public transportation stop, she directed me to that exactly. Most people are incapable of doing that. They can't conceive of walking to get to a better public transport stop, one that will take you directly where you want to go without changing buses or trains.

The basilica is very kitschy. It was done in the early 1960's and it screams that era. In fact, I was flashing back to visiting the 1964 World's Fair in Flushing with Daddy and some of my siblings; forget which. (I remember we phoned someone at home through a special phone.)

The gigantic mosaic Jesus on the ceiling at the end of the main aisle has blond hair.

And yet I felt a profound spirituality here that I did not feel at the National Cathedral. I spent as long in this church as at the other, and not once did anyone make a crack about my poor clothes, or my backpack. I wasn't the poorest looking person there. The neighborhood is godawful. You ride through slums to get there, not through expansive ambassadorial mansions.

The center aisle is lined by chapels devoted to Mary as she is revered in various countries. These aren't rich countries and the people who revere her are pathetic. There is Our Lady of Częstochowa, Our Lady of Sorrows from Slovakia, Our Lady of Siluva from Lithuania, Guadalupe from Mexico, Our Lady of Antipolo from the Philippines, Our Lady of China. Yes, Jesus is blond in this church, but there are at least two black Marys – Częstochowa and Antipolo, and one Indian Mary – Guadalupe, and Our Lady of China has Chinese features and wears a Chinese costume.

And there were Filipinos praying there, and Black people…nothing like the hoards of undifferentiated WASPs at the National Cathedral. I like that about Catholicism. And I like it that you can always hear babies crying in Catholic churches. We don't have special soundproof rooms we put them in.

I wanted to stay longer, much longer, but I had bought a Greyhound ticket for six, so I did something atypical for me – bought the souvenir booklet – and left. Ran into the skinny kid with the chaw; he was coming out of the subway as I was going in. I smiled and waved; so did he.


Last minute panic – I had miscalculated space and time (nothing new) and had to run to get to the bus station. Walked beside a Jamaican man in a red fur cap (in DC? In summer? One must suffer to be beautiful.) He was skinny and young so he kept me at a quick pace. Got to the station just in time.
Posted by D Goska at 11:27 AM