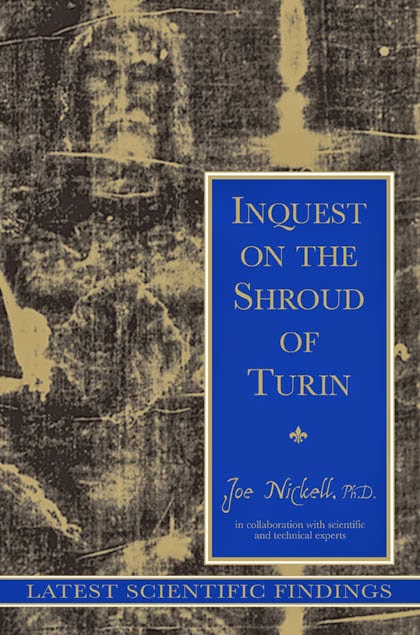 I'm scheduled to give a talk about the Shroud of Turin at the William Paterson University Catholic Campus Ministry Center on Wednesday, April 30th, at six p.m. The talk will probably be to a small audience. It might just be me and my host!

Even so, I want to be as thorough as I can be in my preparation.

Why, then, does a New Atheist like Richard Dawkins, a biologist, have the qualifications to speak with authority about theology? In fact, Dawkins does not have that authority, as Terry Eagleton made clear in his essay "Lunging, Flailing, Mispunching," found here.

I ordered Joe Nickell's PhD dissertation and skimmed it. It addresses the disappearance of Ambrose Bierce, the source of Nathaniel Hawthorne's "Veiled Lady," and William Shakespeare as the possible author of "Pericles."

Scholars are qualified to comment on their area of expertise: Isn't that a basic tenet that the New Atheists, if they really practiced what they preach, would embrace enthusiastically?

Joe Nickell called me back this morning. I salute his courtesy in returning my call and I am grateful for his time.

Nickell began the conversation by asking me repeatedly to say and spell my name. This was repeated multiple times. He also wanted to know where I was. I have to admit that I wondered if this method of beginning our conversation was meant to intimidate me. Like many Polish Americans, I'm used to having to repeat and spell my name, but not that many times!

I didn't record or transcribe the conversation and my account here is as I remember it.

Nickell asked me repeatedly if I were Catholic.

I found this question offensive. What difference does my identity make to the truth? None, of course. Truth is truth, no matter the ethnicity or religion of speaker or hearer.

After being asked more than once if I am Catholic I said that I am. He seemed disapproving. He said that Catholics have behaved badly toward him.

He has my sympathy, but as a citizen of the great, and very diverse state of NJ, I have had negative encounters with persons of any number of ethnicities. I don't harbor ill will toward any, and I don't ask people, "Hey, are you Etruscan? An Etruscan sold me a really bad car once" before interacting with another person.

He said that he has conducted many investigations. That's good, but investigators typically commission experts to comment on key points. He said that he consulted a doctor, Michael M. Baden, who supported his conclusions that the Shroud is inauthentic.

It is good that Nickell consulted Dr. Baden, but Mark Antonacci's book lists 24 doctors who assess the Shroud as authentic. Is the one dissenting voice really proof that it is inauthentic?

Nickell called those with whom he disagrees "shroudies." The term sounded contemptuous to me. Nickell said that "shroudies" are all Catholic and they conclude that the Shroud is authentic and then work backward in an attempt to discover data that will support that conclusion.

I thought immediately of Barrie Schwortz, Shroud spokesperson par excellence. Barrie is of Polish-Jewish ancestry. He grew up in an Orthodox home, complete with separate plates for meat and dairy. Barrie did not want to participate in STURP but did so on the advice of a friend. It took Barrie many years and a lot of study to conclude that the Shroud was authentic. As far as I know, Barrie is still Jewish. (You can read Barrie's story here.)

I could mention others, like Thomas de Wesselow and Yves Delage who were not Christian and who concluded that the Shroud is authentic.

Joe Nickell is simply factually wrong on this point.

Nickell asked me twice if I knew what the word "iconography" means. I was so offended by this I did not answer.

Nickell said he was able to produce a reasonable replica of the Shroud. You can find Barrie Schwortz's assessment of Nickell's claim that he has reproduced the Shroud toward the bottom of the page linked here.

I am grateful that Mr. Nickell called me back and answered my question. I am confused by our conversation. It is my subjective impression that Mr. Nickell sounded angry and defensive. He is a famous and successful author, and I am preparing a talk that maybe five people will attend, if I am lucky. Nothing I say at this talk will have any negative impact on his life. It's not clear to me why the anger and defensiveness are necessary.

I'm also confused by the double standards so common among the New Atheists.

Joe Nickell pooh-poohs Catholics as unreliable … and he attempts to strengthen his own case by citing a Catholic bishop.

Joe Nickell insists that scientific training is necessary in order to speak authoritatively, but he does not have a degree in science and I don't see his work being published by scholarly journals, as much pro-authenticity work is.

Joe Nickell casts aspersions on faith … but cites the Gospel of John as supporting his point (when in fact it does not.)


Again, I really do salute and appreciate Joe Nickell's courtesy in phoning me back and answering my question. My points here are meant to be larger points that contribute to how New Atheists and skeptics convey their message. If I notice an inconsistency in behavior and message, I'm sure others do, as well.
Posted by D Goska at 3:28 PM