Shroud of Turin 1988 Carbon Date: Is It Possible that Scientists Lied? Or Simply Screwed Up? 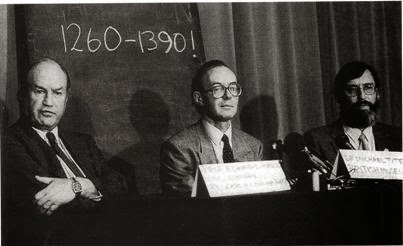 I'm shortly to give a talk on the Shroud of Turin. I'm no expert on this topic; merely one of millions of interested amateurs. In preparing for my talk, I'm reading, of course, about the 1988 carbon dating that estimated the Shroud's date between the thirteenth and fourteenth century. If this date is accurate, there is no way the Shroud could be what it appears to be: a visual record of the death of Jesus, made through some contact of some kind with Jesus' crucified body.

It is said that the Shroud of Turin is the most studied artifact in history. I don't know if that is true, but there is a massive amount of literature devoted to it. In preparing for my talk I've reread three books, watched five documentaries, visited several webpages, conducted a handful of interviews, and I still feel under-informed.

The carbon dating has in and of itself inspired massive literature. The Wikipedia page devoted to the carbon dating of the Shroud of Turin is 14 pages long; five and half of those pages are bibliographic citations of other books, articles, and webpages addressing the carbon dating.

Some of these citations are obviously rants by curmudgeons with axes to grind, for example Tom Chivers' article entitled "The Turin Shroud is Fake. Get over It."

"A Re-evaluation of the Radiocarbon Date of the Shroud of Turin Based on Biofractionation of Carbon Isotopes and a Fire-Simulating Model" published in Archaeological Chemistry.

"Chemical Modification of Cellulose. The Possible Effects of Chemical Cleaning on Fatty Acids Incorporated in Old Textiles" published by the University of Missouri-St. Louis.

Given the massive amount of data that argues for the Shroud's authenticity, many have a problem with the 1988 carbon dating.

It is remarkable that so few mention this possibility.

I've spent the last twenty plus years in academia. I've rubbed shoulders with, house-sat for, and worked as a secretary for world-class scholars. Let me tell you, world-class scholars can be Machiavellian, vain, infantile, needy, thin-skinned, manipulative, highly ambitious, driven, Darwinian machines single-mindedly devoted to their own reputations and power. I've seen interoffice wars break out over what font gets used in a pamphlet advertising a conference. I've witnessed grudge matches between scholars that have lasted for decades and across thousands of miles.

Only a tremendously naïve person, brainwashed by science's own propaganda, would believe that scientists never lie and never screw up.

Just one, recent example of how the peer-review process, our highest standard for scientific truth, has been corrupted and prostituted for person gain: Doctors have falsified scholarly publications for money. In 2012, GlaxoSmithKline was taken to court over one such case.

Given the politicking, backstabbing, breast-beating, plumage grooming, peacock strutting, profiteering, CV-fattening, spitting and growling that scientists engaged in around the 1988 carbon dating of the Shroud, it is entirely believable to me that some might engage in numbers tweaking as well.

Harry Gove stated in so many words that he didn't much care about the Shroud; he just wanted to publicly demonstrate the power of his method (de Wesselow 164). Ego is hardly trustworthy. Teddy Hall was trying to raise money. Greed is not trustworthy.

Shroud author Thomas de Wesselow allows that lies or incompetence may be behind the 1988 date. He mentions some groups, who sound like fringe conspiracy theorists, who think that fraud is the problem. But de Wesselow sees no need for a conspiracy. He points out that, yes, scientists do sometimes lie. He cites one notorious case, that of Hwang Woo-suk, who fabricated research on human stem-cells and who published in Science in 2004 and 2005 (170).

Sometimes scientists lie as part of an attempt to make a larger point. In 1996, NYU physicist Alan Sokal published a fake scholarly article in a prominent journal in an attempt to show how shoddy the journal's standards were.

Madison Grant made a career of lying. He sold vile race theories to the American public in the early twentieth century under the guise of science. He was highly influential in the passing of the immigration quota laws of 1924 and 1929. Hitler called Grant's book his "bible." Grant put a human being on display in the Bronx Zoo – under the auspices of science. Grant was not alone. Almost all American thought in the early twentieth century is tainted with scientific racism.

I could go on but you get my point.

Too, it's possible that someone simply screwed up. Highly trained professionals DO sometimes screw up. Surgeons, more often than you'd suspect, often do amputate the wrong leg, the wrong arm, or the wrong breast, or remove the right bodily organ from the wrong patient. When I was a nurse's aide, I had a patient, Annette B, who had lost BOTH of her legs to two separate doctor's errors. If you want to give yourself nightmares, you can read more about such screw-ups here.

I'm also saying that it says something, something not so positive, about our culture that we think that because scientists say something that it is beyond question. For heaven's sake, scientists are not infallible. They are human beings. Like anyone else, they are susceptible to greed, ego, and error.


And, of course, there should be more testing. When one test result disagrees so firmly with so much of the rest of the evidence, that test needs to be repeated.
Posted by D Goska at 8:50 AM