I live in a majority minority area. After the verdict was released, I was on alert as I walked to work. I am white. Most of my neighbors are not.

I rubbed shoulders, as I always do, with African Americans on the street. And – nothing. No one insulted me, threatened me, or reacted in any strong way to my pale presence.

A black man in a car paused to make sure I made it past him as I crossed his path. I waved, smiled, and mouthed "Thank you." He smiled at me. I am warmed by this small victory of everyday niceness over cultivated hatred.

I thought about the break-up of the former Yugoslavia. I've had a fair number of students from Yugoslavia, and they tell me hair-raising tales.

Back in the early 1990s, when the war was still being fought, in all its fury, with the Serbs singled out as arch villains by the American mainstream press, I asked a student why the war was so ugly. "During World War II," he said, without hesitation, "The Croatian Ustashe used to gouge out Serbs' eyes, and force them to hold their eyeballs in their hands, and squeeze, till their own eyes ran through their fingers like eggs."

A sentence I will never forget.

My Bosniak student Azur described the night his Serbian neighbors turned automatic weapons on his father.

The thing is, Croats, Serbs, and Bosniaks lived in relative peace for decades. Azur had Serbian relatives.

Here I am, much whiter than George Zimmerman, walking through streets thronging with African Americans, who are polite to me. I cherish the conventional grace of everyday courtesy, the heroism of everyday nice people of every distribution of melanin, and I hope we continue to triumph, in our no-headline way, over hate mongers and their cultivated hatreds. 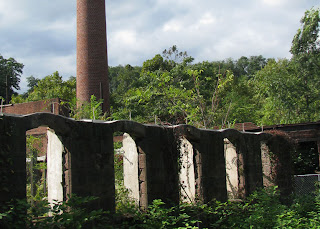 I was walking to work yesterday and I saw COP CARS! FIRE TRUCKS! YELLOW TAPE! ROAD BLOCKED OFF!!!!

It's been really hot here lately. A heat wave gets really boring. I thought, okay, some excitement, finally. My neighbors have finally decided to RIOT OVER THE ZIMMERMAN VERDICT! Watching the riot would be so much more interesting than going to work, and I'd have a good excuse. "Couldn't get to work! Riot! Sorry!"

I saw a crumbled building. Red bricks lay strewn across the street. Whoopee! Someone blew up a building! This is getting more exciting!

I asked a bored looking cop.

The building, an old factory, had collapsed on its own. They were waiting for the wrecking crew to sweep up the bricks and dump them.

The building was an abandoned factory. A factory. Paterson used to be silk city. People used to WORK in Paterson. Now we collect welfare checks and deal drugs.

Okay. So how about this. How about after the Zimmerman verdict, rather than cultivating torture/revenge fantasies, we say, "Look. This is an American city full of African Americans who can't find work. Let's develop a new fantasy. A fantasy of jobs, literacy, and employment skills. Rather than the Obama Administration sending Eric Holder out to cast aspersions on the jury, we send our people to inner cities to get people to work."

A girl can dream.

This photo is of Mark Harris. The day my neighbor posted his torture fantasy about George Zimmerman, Mark Harris was shot to death in our city.

Young black men are shot to death in our city regularly.

I honestly don't know anyone (besides the loved ones) who cares.

Several of my Paterson neighbors are on Facebook. I've never seen any of them post about the young black men regularly shot to death in our city. About the Zimmerman verdict, yes. About our neighbor victims, no.

This is how it looks to me: the attention to the Zimmerman verdict is not about love for Trayvon Martin, it's about hate for putative "white" man George Zimmerman. (Zimmerman's ancestry is significantly Native American, as his facial features show. His mother Gladys is from Peru. She is proud of her family's Afro-Peruvian roots.)

If the brouhaha over this case were about love for black murder victims, and not about hating whitie, you would know about, and you would care about, the young black men murdered in my city, and you don't.

From the NorthJersey.com story about Mark Harris' murder:

"The victim in Sunday morning's 4th Ward homicide had spent most of the past four years in prison on drug charges, a stretch of jail time that started a year after he was arrested for selling crack to a pregnant woman in 2008 just three blocks away from where he was eventually killed, according to city police and state corrections records. Police say 30-year Mark Harris of Fulton Place was gunned down near the drug-infested corner of Rosa Parks Boulevard and 12 Avenue at about 3 a.m., making him Paterson's fifth homicide in the past 23 days and eighth of the year."
Posted by D Goska at 6:07 AM