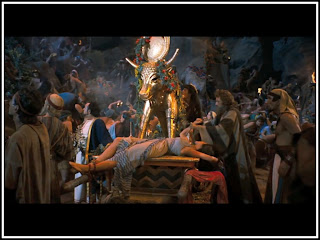 Someone I care about a lot has been ill. Day after day. Not getting better. The body is supposed to get better, supposed to recover. I worried. I said, "Go to a doctor." My comment was ignored. I begged. I ordered. "Go to a doctor!"

I have contact with this person mostly via email. You can't really order someone to go to a doctor via email. It just doesn't carry any weight.

Eventually even this workaholic realized he had to go to a doctor.

He broke the news to me via email. He told me what the diagnosis was.

I googled the term. I wanted to poop my pants.

The very first webpage I clicked on felt like a slap in the face. "Irreversible … no recovery … discuss end-of-life plans now with your doctor."

I keep my rosary right next to the door. I got up and got it and left the apartment.

I felt lead to pray to Our Lady of Lourdes. I prayed for this man's complete recovery.

On February 11, 1858, a "beautiful lady," subsequently identified as Mary, the mother of Jesus, appeared to a poor and chronically ill 14-year-old girl, Bernadette Soubirous, in Lourdes, France. Miraculous healings have taken place at Lourdes.

I've never accepted Bernadette's story uncritically. I talk about my best understanding of what transpired there in "Save Send Delete". I also talk about my attempts to understand the Lourdes apparition in my Amazon review of Franz Werfel's excellent book, "Song of Bernadette." You can read that review here.

Franz Werfel was a prize-winning Jewish writer from Prague, friend to Franz Kafka and Martin Buber. He published work that mocked Hitler. Werfel was escaping from the Holocaust when he, inspired by a trip to Lourdes in his escape, took a vow to write something that would honor what he experienced there.

I felt lead to pray to Our Lady of Lourdes, and I did. I prayed that the recently diagnosed man recover completely. Through facebook, I asked others to pray, as well. I asked them to pray regardless of their faith, or lack of faith.

I mentioned Our Lady of Lourdes and I posted artist Hector Garrido's depiction of her, as described by Bernadette. It's a beautiful, comforting image of a serene, praying woman in a rocky landscape, similar to the Masabielle grotto where Bernadette first saw her beautiful lady. I thought that persons of many faiths might find such an image conducive to prayer. I watched a youtube video about a woman who was cured of a painful illness at Lourdes. And I prayed some more.

The man for whom I was praying wrote back eight days later. He had been given further tests. They withdrew the previous diagnosis. He didn't have the dread disease they thought he had.

I exhaled. I rejoiced. I thanked Our Lady of Lourdes.

I wrote to this man. I told him I'd been praying for a miracle to our Lady of Lourdes.

He wrote back. "I'm Protestant."

I was a bit stunned.

He wrote back, "We believe that's idolatry."

My mother lost two sons in the prime of life. My brother Phil was killed on my birthday.

My brother Mike had been a loudmouthed atheist. He would, predictably, cause a ruckus at family reunions, insisting that there is no God. Then he found God. He became a Protestant.

While I was serving in Peace Corps in Nepal, Mike became terminally ill. I flew back and visited him in the hospital.

"Everyone is praying for you, Mike! All my friends! Hindus, Buddhists – "

"God does not hear the prayers of a Jew," Mike said, quoting Bailey Smith, president of the Southern Baptist Convetion.

I didn't witness this, but I was told this story. I was told that one of Mike's Protestant friends approached my mother at Mike's funeral, and said to her, "It's such a shame that you are Catholic and will go to Hell. You will never be reunited with Mike in Heaven."

About seven years ago, I applied for a teaching job at a Christian university. The job description excited me more than I can say.

The school phoned me for an interview. I was thrilled. Through the roof, happy, excited, hopeful.

At some point in the process it came out that I am Catholic.

"We don't hire Catholics at our Christian university."

I was so hurt I wrote a ten-page letter. And I mailed it, too.

As I mention in "Save Send Delete," I'm not much of a Christian or a Catholic. I "curse God and die" on a daily basis. I regularly commit a very predictable catalogue of sins.

I wrote the book defending my faith because I see the best in the Judeo-Christian under constant, dangerous, and destructive attack. A child of Eastern European immigrants, I lived in the atheist paradise the Soviets attempted to create. I saw that Brave New World and it is monstrous. Even if I were not a believing Christian, I would have to acknowledge that that Judeo-Christian tradition makes the world a better place.

I grew up in working class New Jersey where Protestants looked down on Catholics because of class snobbery, not theological doctrine. Catholics were, largely, blue collar; Protestants, more frequently, white collar. Catholic last name ended in vowels. We were the more recent, low-rent immigrants from Poland and Italy. Protestants were stiffer folk from northwestern Europe. The Protestants who looked down on us might not have known a thing about transubstantiation, but they knew very well what side of the tracks we came from. As a Protestant friend memorably said to me once after giving me a ride home and seeing where I lived, "My car costs more than your house."

I so wish that Protestant snobbery toward Catholics would wither and die a long overdue death. I so wish my Protestant brothers and sisters would get it that Christianity is under attack from several forces, including Political Correctness, Jihad – see the treatment of Copts in Egypt, men like Youcef Nadarkhani in Iran and the exodus of Christians from Iraq – and secularism. I so wish that the seriousness of these challenges would cause my Protestant brothers and sisters to recognize that their snobbery toward Catholics is utterly trivial in comparison to the real challenges we face.

If you do a Google image search of the word "idolatry," some of the first images you find are of Catholics, specifically Polish Catholics, including the two below. I am so saddened that so many Protestants devote so much energy to demonizing Catholics. One might think that they would find bigger fish to fry. 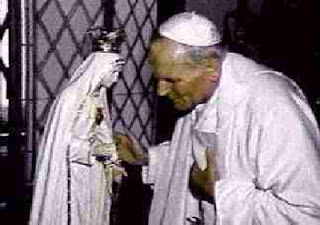