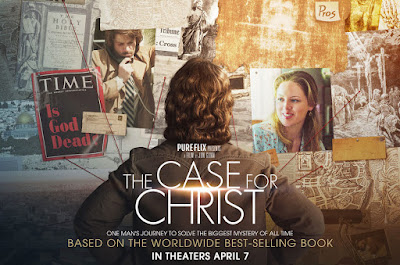 In "The Case for Christ" books, Lee Strobel, a Yale-educated Chicago Tribune reporter, takes up the major objections to belief in Jesus Christ. He then travels to a series of world-class experts in the question. Questions include, did Jesus rise from the dead? Did he die on the cross? How reliable are the books of the New Testament? Strobel had been an atheist. His search for the replies to these questions turned him into a Christian. The books make for an exciting read.

"The Case for Christ" the 2017 movie is nothing like the book. It's really more of a low-budget soap opera. Lee, an atheist, is married to Leslie, who converts to Christianity. He goes on a truncated and dumbed-down version of the journey of discovery recorded in the books. The experts he visits are depicted in simple-minded ways. One is a scientist. He is shown in a white coat, surrounded by other people in white coats. He walks among microscopes and lab flasks as he is interviewed by Strobel. Another interviewee is a university professor. She is shown in a large, old-fashioned, university classroom, seated at a large teacher's desk, with a large blackboard behind her. One is a Catholic priest. Strobel enters a Catholic church and walks through it.

The film has three foci: Lee's intellectual journey, Lee's marriage and relationships with his parents and children, and Lee's job as a reporter. The three narratives don't support each other. A better "Case for Christ" film could have been made as a documentary. The viewer could watch real interviews with real experts, without the distraction of the other storylines.

"The Case for Christ" is set in the 1980s, and the clothing, hairstyles and home décor appear to be not just of that era, but so weather-beaten as to be from that era. Other than Faye Dunaway, who makes a brief appearance, most of the actors are not well known, and they do not shine, possibly from the weak script or direction or their own lack of star power. Cindy Hogan has a small role as Lee Stroble's mother, and she is very powerful in that part. Her brief appearance stuck me as the one moment of authentic human emotion in the film.
Posted by D Goska at 6:44 AM