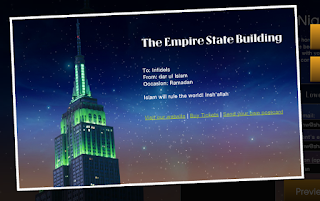 Your decision to illuminate the Empire State Building in green, the Islamic color, on Friday, July 17, 2015, to mark Eid al-Fitr was a grotesque error. By doing so, you imperiled the lives of every one of your fellow American citizens. Your choice may facilitate violence that will result in death. You will have to live with those consequences.

Of course most Muslims are good, non-violent, and decent people. In relation to your decision to illuminate your building in green, these good people are, alas, not relevant.

What is relevant is this: there are powerful, armed groups whose stated goal is to attack and kill Americans, and, indeed, in their own words, all Christians and Jews. These groups include, but are not limited to, ISIS, the Islamic state.

What is relevant is this: on Thursday, July 16, the day before you illuminated one of the tallest and most iconic buildings in the US in the Islamic color, Muhammad Abdulazeez murdered five uniformed American servicemen in Chattanooga, Tennessee.

What is relevant is this: Muhammad Abdulazeez identified his actions in messages sent to friends as in accord with Islamic doctrine and Koranic verses.

What is relevant is this: ISIS took credit for this shooting. Whether their claim is accurate or not, their attentiveness to events in America is instructive. ISIS cares what occurs in America. ISIS noted your illumination of the Empire State Building the day after the Chattanooga massacre.

One must conclude that groups like ISIS who openly call for death to all Americans and the ultimate destruction of Western Civilization were encouraged, emboldened, and egged on by your disastrous choice.

Right-thinking Americans bear no malice to innocent Muslims who are not violent. Innocent Muslims are not the point here. What is the point is that there is a critical mass of Muslims who do wish every one of us dead. Such Muslims made their desires all too well known on September 11, 2001, in the Portland Christmas tree bombing plot, at the Boston Marathon, in Garland, Texas, in the air over Detroit, in Fort Hood Texas, and in too many other incidents to itemize here.

You, Anthony E. Malkin of Empire State Reality Trust, sent a message to ISIS and Boko Haram and al-Shabab and others like them. You announced, loud and clear: powerful people in America are so feeble, so unaware, so unthinking, so ashamed of their own heritage, that they can be duped into sending a signal that will be understood by all too many as celebrating a jihad attack on their own soil. That message that you sent, Anthony E. Malkin, for all the world to see, endangers every American and every Westerner.

Please find another way to indicate your appreciation of peaceful Muslims and Islamic culture. Please find a way to make clear that you stand with Western Civilization. Please find a way to make amends to all of us whom you have wounded with your choice, most especially amends must be made to the loved ones of Sergeant Carson A. Holmquist, age 25, Logistics Specialist Randall Smith, age 26, Gunnery Sergeant Thomas J. Sullivan, 40, and Staff Sergeant David A. Wyatt, 37. None of these men will ever live to be as old as you are now.