Can You Be Friends With Someone You Disagree with Politically and Religiously? 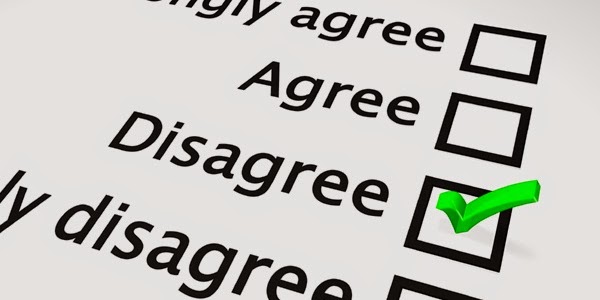 Can you be friends with someone you disagree with politically and religiously?

I am friends with Sandy McReynolds, with whom I disagree about religion and politics, so I think the answer is "yes."

I was the person who approached "Cathy" and wanted to be friends with her. She was smart, civil, kind, helpful, and fearless. I admire those qualities. I liked Cathy. Cathy helped me with a complicated computer problem. Cathy educated me about a couple of news stories I was not following closely. I admire helpfulness and intelligence. I enjoyed and was grateful for our friendship, even though we weren't close.

During the military conflict between Israel and Gaza, Cathy focused a lot of pity on Arab babies "murdered" by Jews. This struck me, because I had never previously seen Cathy express any compassion for anyone who was killed by anyone else. Heaven knows there are enough wars going on in the world right now. If one wanted to focus attention on victims of killing in war, there is the Syrian Civil War, the victims of Boko Haram in Nigeria or the mall attack in Kenya.

No. Cathy had never expressed any sadness over those deaths.

Cathy was really, really sad, and she wanted everyone else to be really, really sad, about cute, innocent babies murdered by Jews. And the Jews doing this killing are genocidal, and they get satisfaction and pleasure from killing Arab babies, and the Jews want to kill all Arabs, and probably all Muslims. (World Jewish population: 13 million. World Muslim population: 1.6 billion. Plausible?)

I did not want to conclude that Cathy was working up so much grief over Arab babies killed by Jews because Cathy was anti-Semitic. I don't like kneejerk accusations of antisemitism or racism or misogyny or homophobia. I think we should be slow to apply these labels to anyone. They are serious accusations and everyone should be given the benefit of the doubt.

I think we should do everything we can to keep friendships going, not just for our own benefit – it is good to have friends – but also for the benefit of human community – it is good for humans to learn to coexist.

It hurts my feelings when people drop me as a friend. Recently two people, Carol and Chris, dropped me as a friend because I spoke openly of my ugly and life-threatening experiences with Obamacare. I felt sad. I noted the irony of Carol and Chris' logic: "I support healthcare for the poor so much that I cannot be friends with a poor person who needs healthcare who has been screwed by Obamacare." Feh.

Look – it's just a disagreement – I support Israel – you don't – do we have to stop being friends over that?

Besides, bottom line, even if Cathy were anti-Semitic, that wouldn't necessarily cause me any trouble. I'm not Jewish.

Cathy made snide, cynical, joke-like statements about the American journalists beheaded on camera by ISIS. These statements made my guts churn. I returned to them over and over. Did she really say that? This nice person? My friend, however casual and distant? Did she really say that? Those words exactly? About James Foley and Steven Sotloff, these two innocent, defenseless men decapitated on camera in a terrifying and humiliating way?

Foley and Sotloff, by all accounts, were really nice, idealistic, caring guys who gave up comfortable lives in order to cover the Arab world's problems, in order to help solve them. Why make cynical, joke-like statements mocking their deaths, when their bodies were not even yet cold?

I was stopped stock still. I just stared. Did she really just say that? Did people really just hear that and not object?

But what about all that compassion for dead Arab babies?

Cathy had a reason for scoffing at Foley and Sotloff. Their decapitations had been manipulated by the CIA, because tptb (the powers that be) want us to go to war with innocent Muslims. Cathy was refusing to allow her pity to be manipulated by tptb to twist her into hating Muslims. Okay …

But then the straw that broke the camel's back.

Cathy said this. She said, in so many words, that most or maybe even all Americans want to kill all Muslims.

Again, my reaction was, did she just say that? Really?

Americans are genocidal? Murderers? Staying up late at night plotting the genocide of all the world's Muslims? Really? She believes this? Americans are plotting the murder of Muslims in Paterson, Dearborn, Cairo and Lahore?

When people are sad about Arab babies that Israel "murders," though you've never heard them express any sadness over any other dead baby, you can wonder about antisemitism, but it's not conclusive.

When someone publicly jeers at Americans decapitated on camera by terrorists, you might think about the times in your life you said something that was tasteless and misconstrued, and move on.

When someone who is otherwise intelligent and informed mocks victims of sadistic and hateful public executions because she's convinced that these executions are mere theater cooked up by the shadowy and evil powers that be, you can kind of feel sorry for the person and hope for better education in public schools.

But when someone tells a whopper lie like that, in the tense atmosphere we all live in now, just two days away from the anniversary of 9-11, there really is no more room for doubt.

The statement is false. It's more than false. It's evil. There's nothing ambiguous there.

There are terrorists murdering Americans right now, and stating publicly that every American is a target for death at any time. Americans do not deserve this death sentence. We aren't guilty of any crime that warrants this. The terrorist death sentence on all of us, every last one of us, including Muslim Americans, including babies, including grandmothers, is morally wrong. To obfuscate that crystal clear moral truth is evil.

Cathy's claim that all Americans have evil hearts and are plotting and planning to murder all Muslims on planet earth is beyond false. It is an evil claim, stated to justify the killing of Americans.

And so Cathy and I are no longer friends.

I'm also no longer friends with another person. This person, "Rob," approached me after I published an article about supporting Israel on Facebook. He complimented my "good values, rational sense and intellectual curiosity." So far so good.

But then Rob began sending me numerous and lengthy posts (ten posts a day, pages of material) insisting that my faith, Christianity, is inherently anti-Semitic, that Nazism was Christian, that Chmielnicki (who murdered Polish Catholics) was Polish, that Poles are all anti-Semites and of course if I deny that that's proof that I'm an anti-semite just like all the other Poles.

I responded to Rob's uninvited and unwelcome pages of posts attacking and insulting my faith and my ethnicity. I responded courteously. I responded with facts. Not hard to do. I've published a book on the topic, and I've been working on it for years.

Rob called me a liar and insulted me personally.


Letting go of any hope of friendship with Rob was not hard.
Posted by D Goska at 4:25 AM