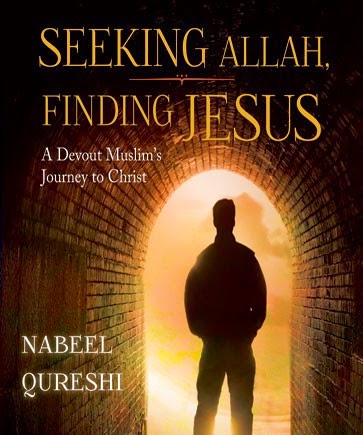 Every Muslim should read "Seeking Allah, Finding Jesus." Faith is worthless unless it can withstand a challenge. "Finding Jesus" is a reader-friendly book. Its chapters are short and its language is simple and direct.

Nabeel Qureshi is the son of Pakistani Muslims and the grandson of Muslim missionaries. His family scrupulously practiced the five pillars of Islam. In the US, at college, Qureshi met David Wood, now an evangelist. Qureshi and Wood became best friends and had a banteringly competitive relationship. Qureshi was confident that he could present his Islamic beliefs in a way that would triumph.

Qureshi was deeply uncomfortable when Christians said things that shook his belief (211). He plunged into study and prayer and had to confront the fact that Islam does not withstand analysis, whereas Christianity does. In the final pages of the book, Qureshi describes accepting Christ and the shattering effect that had on his personal life. Islam proscribes the death penalty for apostates. Qureshi is a brave man.

Approximately the first hundred pages are an apologetic for Muslims. Qureshi loves his parents deeply and he wants anyone who reads his book to love them, too. His parents, his extended family and their friends, Qureshi insists, are lovable people completely innocent of any association with terrorists or jihad. He describes Ramadan, for example, as "a time to build community, restore broken relationships, strive for purity" (69). His description of the 9-11 terror attacks focuses on Muslims as potential victims of American hate crimes. "They're blaming Muslims" (114) he writes.

Qureshi was raised to believe that Mohammed was al-Insan al-Kamil, the perfect man. Many English-language texts use "PBUH" (peace be upon him) after mentions of Mohammed but Qureshi uses Arabic script that looks like a porcupine walking across the page. The presence of Arabic script in an English language book felt like an affectation, and given how Qureshi came to feel about Mohammed, I'm not sure why it appears at all.

Most Muslims he knew could recite many chapters of the Koran from memory, but they didn't know what it meant. The Koran was never to be placed on the floor. One had to wash one's hands before touching it. Salaat, prayer, is performed by rote. Even postures are dictated. "There is nothing personal about salaat…it is simply an act of duty, not personal or heartfelt" (49). The prayers are performed in archaic Arabic. "The language of the daily prayers is not personal to anyone" (50).

Qureshi's parents do not encourage him to develop his own conscience, or to question. At one point Qureshi was practicing a pro-Islam speech his mother had written for him. During practice runs, "she stood behind me while I was speaking and moved my arms and hands at appropriate times…as if I were her marionette" (58).

Qureshi acknowledges that his propensity to think and ask questions did not win favor from his elders, whom he was supposed unquestioningly to obey. He experienced culture shock when he was encouraged, in an American school, to question everything (76). "Authority in Western culture is reason itself" (108).

A cousin falls in love with a Hindu. Her entire extended family, including aunts and uncles, descend upon her and subject her to the third degree "Are you still a virgin?" "How could you fall in love with a Hindu?" "Allah forgive us!" "Don't become Americanized!"

Qureshi proposes a paradigm to explain Pakistani behavior. Pakistani Muslims, he argues, believe in authority, rather than personal conscience. Thus, his fellows could cheat insurance companies and restaurants without discomfort, as long as they were not found out. Once their crimes became publicly known and resulted in public shame, then and only then did the crimes become a problem.

Muslims think badly of Christians, Qureshi says, because Christians have not represented themselves well (81). Muslims are taught, and repeat, misconceptions about Christians. Christians have no concept of sin or responsibility, the Bible is corrupt, Christians are polytheists, Jesus either was never crucified or he survived crucifixion.

Through contact with David Wood, Qureshi discovers that he and other Muslims have spent their lives immersed in falsehoods. No, Mohammed was not a nice guy. His prophetic call was ugly; a supernatural being pressed his chest and terrified him so badly he contemplated suicide. Mohammed did condone the worst violations for female captives. Early Muslims did fight offensive wars and slaughter innocents.

Yes, Mohammed did unambiguously state that it is his mission to violently fight all humanity until everyone submitted to his concept of God; otherwise, he had every right to murder them and claim their property. The Koran, contrary to popular claims, contains no accurate prophecies of future events nor any advanced scientific knowledge. The Koran is not exactly as it was first set down; there were political struggles in its compilation and previous versions were burnt.

With the same thoroughness and accessibility that he devotes to detailing his reasons for leaving Islam, Qureshi walks the reader through his responses to Islam's theological objections to Christianity. Muslims claim the Bible is corrupt; not true; the New Testament was written within decades of Jesus' death, and we have manuscripts going back to antiquity. Jesus did claim divinity, he was crucified, and he did rise from the dead.

"Finding Jesus" is more of an evangelical tract than it is a memoir; it reveals no literary ambition. I was disappointed by its lack of intimacy and passion. Qureshi's coming out to his parents as a Christian is described in a skeletally brief sketch that leaves more questions than it answers.

I was put off by what struck me as Qureshi's assumption that his Western, Christian readers needed airbrushed, super-nice, "Leave It to Beaver" Muslims to feel comfortable with them.

Qureshi lets his parents and his former fellow believers off too easily. It's clear that his parents know the Koran backward and forward. Why had they never questioned its violence, its contempt for non-Muslims, and condoning of the worst violation of female captives?


Can mommy and daddy Qureshi really not see anything to critique in their natal country and nothing to admire in the one they immigrated to? When Qureshi married, I'm guessing an American Christian, his parents and sibling refused to attend his wedding. All of his efforts to create a positive image of his parents in his readers' eyes fell flat for me. I think I could have learned to love these folks if the book had been more literary, more intimate, and presented a less airbrushed picture of these two with all of their hopes, fears, warts and failings.
Posted by D Goska at 6:09 AM