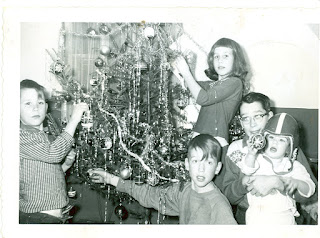 She was in bed. The TV was on. No one else was there.

I sat in the chair in the corner.

She had had a really bad autumn. There were times in autumn, 2014, when I left the various facilities she was at, that I thought I might never see her alive again. She was in three different facilities. I never really saw the point of moving her so much, but better minds than mine were at work.

She had had a bad infection, and was on massive antibiotics. She was slipping away from us, and no one could explain why. She was terminally ill. We knew that. The head doctor would summon us out into the hallway and when her daughter or her husband appeared too effervescent, too hopeful, when they used verbs that seemed to indicate too much of an investment in any kind of future tense, the head doctor would look at them, his brows as heavy as concrete.

As I've said, I knew from the first phone call, even though that first call was just to report that she'd been driving erratically. I never spoke with too much hope. I never needed the leaden-brow lecture in the hall from the head doctor who specializes in a disease that always removes his patients within a matter of months of initial diagnosis. How he does it I do not know.

But, with all that, she was too sick last autumn, sicker than seemed appropriate. They kept saying that at that point, the tumor was only the size of a pea.

Later it would grow so fast that the nurse who saw the MRI looked at my sister's daughter and she, the daughter, saw the nurse's facial expression and burst into tears and it was all too clear. But that was later.

My sister should have been okay last fall, and she wasn't. She very much wasn't. One night, Halloween, I had actually shown up in my Halloween costume, to amuse her -- she and I had loved to play dress up together -- and she was completely unresponsive. She ws making motions with her hands as if sewing something, but her hands were empty. She kept repeating her youngest child's name, but her eyes were dead.

I'm telling you, environmentalist Aldo Leopold talks about seeing green fire die in the eyes of a wolf he'd shot. Antoinette had crackling green eyes and seeing her eyes that night I knew every pain Leopold felt and more.

I thank Otto for being with me that evening.

But then the antibiotics kicked in and she re-inhabited her body and they released her from the various facilities and she was at home on Christmas, 2014.

Christmas day is always a challenge for us alone-in-the-universe types. I often hike, go to the movies, or really plunge into a book. I can get serious reading done, my dyslexia and ADHD less stimulated by a world obsessed with family. I am surrounded by a cushion of empty silence and can really read.

Antoinette and I had tried to spend Christmas together in 2005, right after I got back from Indiana. We hadn't seen each other or spoken or written or anything in almost a decade at that point. If I told you what prompted that separation your hair might catch on fire. My loved ones are nothing if not skilled at crafting the kind of scenarios that can lead to a decade of silence. Let's just say she had done something ... really bad. Something followed by ten years of silence.

We tried to spend Christmas together in 2005, and ... that did not work out. Someday I can tell all these stories. Now is not the time.

So we had not been together on Christmas ... not since, I don't think, we spent Christmas at Aunt Phyllis' father-in-law's house, the lovely, Victorian, wrap around porch haunted shore house across from the very same St George's-by-the-river church that new Facebook friend Walter Perry mentioned just the other day. The year she finally stopped giving me feminine presents, and she gave me a Swiss Army Knife, and I was so touched, I opened it up and cried, and she laughed, "Oh my God, you are crying? I thought you'd like it!" I didn't like it; I loved it. I just cut my nails with it two minutes ago.

But when we were kids, oh, we were together on Christmas. We used to go to Midnight Mass together. We used to giggle like idiots when the passage from Isaiah was read "The pole on their shoulder..." Tee hee hee ... we're Polish ... Pole on the shoulder ...

One year Mommy gave us matching rosaries. Antoinette's was lavender. Mine was sky blue. I still have the box. So, so pretty.

We'd stay up late grinding walnuts for kolache and Slovak Christmas cookies. We'd exhaust ourselves in the kitchen. That room is in fact so small but we burned up as many calories, and built up as many muscles, as Olympians do in giant gymnasiums. Eastern Europeans know how to combine punishing routines with gustatory sensuosity.

We'd smell nice, with some little girl perfume we'd just gotten as a present – Heaven Sent by Avon. Midnight Mass feels like the unfamiliar feel of pantyhose -- we got dressed up for mass. And the sparkle of the snow under the streetlights, its crunch underfoot, the distant sound of chains on tires, as we walked to St Francis Church. The red, purple, green and gold glow of the stained glass windows reflected on the white snow on the expanse of church lawn.

"What Child is This" her favorite Christmas carol. And "Angels We Have Heard on High."

The church would be crowded and there would be muffled coughs and the vague scent of moist wool and moth balls. There would be old Italian ladies in black lace mantillas. One of our regular church ladies' head was always tilted. I don't know if it was an injury or a birth defect.

We were surrounded by very strong, wounded people who carried their wounds with great fortitude and dignity.

I missed those old church people so very badly as I traveled the world and when I returned and they hugged me at my mother's funeral I wanted to grab them and never let them go, realizing how precious and irreplaceable they all were. Lillian Evans, Rosemary Salmon, Mary Manning, Ethel Daughren, Ellie Burns: soldiers in a spiritual army.

So Christmas, 2014, was the first time Antoinette spent Christmas together in quite a while, iirc.

She was lying on the bed the whole time. I sat in the chair. I had brought my computer and I was paging through Facebook. Antoinette didn't need all my attention. She couldn't use it. I remember we talked about movies. I remember she kept trying to use the remote control and not using it correctly and screwing up the TV and my feeble attempts to get broadcasting back.

She'd ask what was on, and I'd tell her, and we'd talk about that for a bit, and she'd drift out, and drift back in again.

As it ever is with someone who is terminally ill, she was in and out of various degrees of awareness. I assume they were giving her something for anxiety. She was more mellow.

Here's something I haven't yet attempted to communicate, because I think it's just too hard, and too easy to be misunderstood.

The hours that I spent with her as she was dying, and in bed, hours when I could do nothing to rescue her or alter her fate in any way, were some of the most pleasant hours I spent with her in some time.

Those memories of being in the same bed, talking, playing, giggling, making up stories to entertain each other.

All that came back when I used to sit next to her when she was in bed.

It did last Christmas. As the night wore on, she and I were the only ones in the house, just Toni and Di, two sisters in bed surrounded by a big night of darkness. When we were kids, the obvious metaphor for the large dark unknown surrounding us was life; now, of course, it was death. It had all gone by so quickly.
I realized, Christmas is always hard for alone-in-the-universe me, but this is the best Christmas I've had in a while, and I know it is her last, and no matter what happens, I know Christmas next year will not be better than this one.
Posted by D Goska at 8:27 AM